Liars vs. Nerds: So Much For Proposition CC 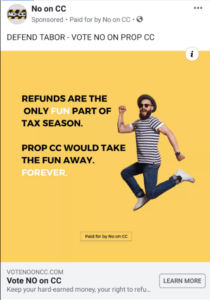 The only-in-the-nation fiscal handcuffs on Colorado’s budget will remain in place after voters Tuesday rejected a move by Democrats to repeal the spending limits in the Taxpayer’s Bill of Rights.

Preliminary election returns showed Proposition CC losing by a solid margin, trailing 56% to 44% with an estimated three-quarters of the vote counted.

If the numbers hold, it would amount to a resounding victory for fiscal conservatives and national organizations that spent big money to keep TABOR intact and push back against Gov. Jared Polis and the Democratic agenda.

There’s little question that the double-digit defeat of Proposition CC was a victory for Republicans, but we’ll stop short of calling it a “resounding” victory because the math doesn’t support the superlative. Compared to previous off-year revenue questions, 2013’s Amendment 66 and 2011’s Proposition 103, Proposition CC actually did quite a bit better–Amendment 66 only garnered 35.54%, and Prop 103 36.3%. Everything short of a win is of course a loss, and we’re not trying to sugar coat this undeniable defeat, but comparing the outcome of Proposition CC to these previous measures shouldn’t leave proponents entirely hopeless.

It is clear, however, that TABOR reform proponents need to recalibrate their game for future elections–and be ready for misinformation that might seem outlandish at first but in the end was persuasive with low-information voters. Prop CC’s opponents deliberately sought to mislead voters about what kinds of “tax refunds” would be affected by the measure. Numerous ads against Proposition CC warned that voters would “sign away their tax refunds” with no distinction between TABOR rebates, which are infrequent and based on the total state revenue exceeding TABOR’s revenue growth cap, and the vastly more common income tax overpayment refunds that most voters are familiar with.

On the other side, the thinktank-driven campaign to pass Proposition CC was overrun by an opposition campaign relying on a single-sentence falsehood to induce “no” votes. It’s not our purpose here today to beat up Prop CC’s proponents, since in historical context they didn’t do that badly. But the Yes on CC’s reliance on dense technical bullet points to sell the Proposition to voters was ineffective against an easy-to-comprehend false argument from opponents. It may also be found in the post-mortem that leading off the ballot language with the words “without raising taxes” was a strategic mistake as well, even though it’s a perfectly defensible statement since tax rates under the measure would not have increased. In the back-and-forth of accusations between the sides, though, opponents were able to successfully cast this as deceptive and rebut the charge that they themselves were misleading voters far more egregiously.

In the 2018 elections, a tax increase measure for roads, Proposition 110, failed with only 40% of the vote–in the same election that Colorado Democrats triumphed at every level with the biggest electoral gains since Franklin Delano Roosevelt. The one thing we can say confidently today is that Republican candidates have an established record of being totally unable to capitalize on TABOR ballot measure wins. Understanding this sometimes-confusing dynamic in Colorado politics takes more than any one election, but yesterday’s outcome didn’t change it.

Colorado voters want what Democrats have to offer. They just don’t want to pay for it.

And that is where the next debate over TABOR will begin.