Get More Smarter on Wednesday (September 11)

It’s been 18 years since the September 11 attacks; the Denver Post remembers Coloradans who perished that day. Let’s Get More Smarter. If you think we missed something important, please include the link in the comments below (here’s a good example). If you are more of an audio/visual learner, check out The Get More Smarter Show or The Get More Smarter Podcast. And don’t forget to find us Facebook and Twitter.

► Congressional Republicans avoided a disastrous outcome in a special election in North Carolina on Tuesday. But as Chris Cillizza writes for CNN, all is not well:

Republican Dan Bishop beat Democrat Dan McCready in a special election in North Carolina’s 9th District, an outcome that, given the clear Republican lean of the suburban Charlotte district, should have been a lay-up for the GOP. Bishop won by 2 points after both national parties spent more than $10 million in the district.

That Bishop won — whether by two votes, 2 points or 20 points — averts what would have been an absolute panic within the GOP conference had he come up short. Politics is, at its essence, about winning and losing — and when you have a party coming off as sweeping a defeat as House Republicans suffered in 2018, it’s always a good thing to wind up on the victorious side of the ledger.

But it is also true that Bishop’s victory — and the way in which it was achieved — should still be read as a warning sign for a party that is dealing with a very unpopular President and a decidedly unsettled political environment.

President Trump carried NC-9 by 12 points in 2016. Bishop’s 2-point victory on Tuesday means that the national environment is still terrible for Republicans. That’s significant news in Colorado for Rep. Jason Crow (D-Aurora), who will be defending his seat for the first time in 2020.

► Colorado Republicans are now 0-4 in their efforts to recall various elected officials in Colorado. On Tuesday recall groups announced that they were ending efforts to gather petition signatures for the removal of State Sens. Pete Lee (D-Colorado Springs) and Brittany Pettersen (D-Lakewood). In a nutty statement, the group “Recall Et. All” said that they “are confident in the success of our future efforts to recall both of these elected officials” and then accused mysterious “leftists” of targeting 60-80 year old female petition gatherers for abuse of some sort.

► Senator Cory Gardner (R-Yuma) is quite clearly very nervous about the lack of enthusiasm over his pet project to move the headquarters of the Bureau of Land Management (BLM) to Colorado. Gardner delivered a stupifying speech on the Senate floor on Tuesday that relied on absurd rhetoric to make his point:

This is, in a word, childish.

Members of the House Resources Committee grilled BLM leaders on Tuesday about the proposed HQ move to Grand Junction.

► Aurora’s Mayoral race is getting some national attention thanks to former Arizona Rep. Gabrielle Giffords. From the Aurora Sentinel:

…This weekend Montgomery’s mayoral campaign is getting a formal nod from Giffords and her advocacy group that notably focuses on contentious congressional races and operates in the realm of national politics.

Former Congressman Mike Coffman is among the candidates running for Mayor of Aurora.

► President Trump’s sudden dismissal of National Security Adviser John Bolton smells a little funny, writes Aaron Blake of the Washington Post. Meanwhile, details of problems with Trump and Bolton continue to filter out into the press.

► President Trump is bellyaching about his low poll numbers on a day that is supposed to be about 9/11 remembrance. According to a new poll from ABC News/Washington Post, Trump would lose to at least five different Democratic Presidential challengers if the election were held today: 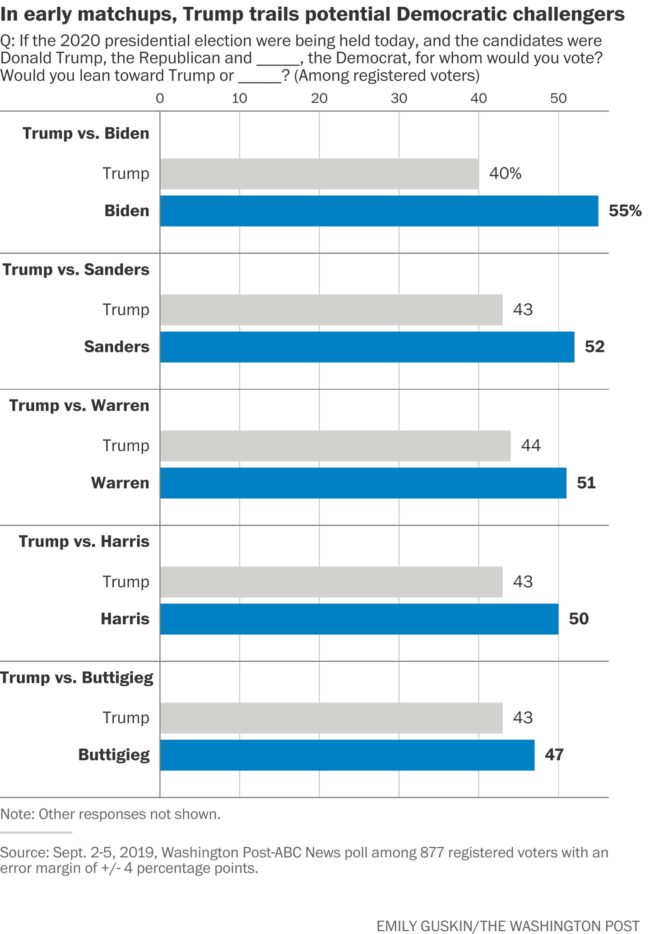 No President in modern times has won re-election after polling as poorly as Trump does at this point ahead of the next election. Among a sampling of all adults in the United States, Trump’s approval rating never rises above 41 percent. Vox.com has more on Trump’s response to this latest poll.

► Politico magazine examines how supporters of Vice President Mike Pence managed to convince Donald Trump to selected him as a running mate in 2016.

► British Prime Minister Boris Johnson, also described as England’s version of Donald Trump, is having one hell of a time trying to do anything in a very divided Parliament.

► Senator Michael Bennet (D-Denver) opened his national Presidential campaign headquarters in Lakewood on Tuesday with a visit from former Gov. Bill Ritter and his sharp goatee.

► Critics alleged that capping costs on insulin in Colorado would lead to higher insurance rates. That has not happened.

Due to poor air quality, the federal Environmental Protection Agency has proposed reclassifying the Denver Metro/North Front Range area from a “moderate” non-attainment area to a “serious” one, paving the way for new regulatory measures affecting industries and consumers.

Air quality data collected from 2015 to 2017 showed the northern Front Range failed to meet the EPA’s ozone standards, triggering the proposed change. The EPA held a hearing on the matter Sept. 6 and is accepting written comments through Sept. 16.

► Now that Democratic State Rep. Janet Buckner is running for a State Senate seat in Aurora, a Democrat who was previously seeking that seat has changed races to run for Buckner’s House seat.

► The “wipes crisis” is very real.

► Turning Point USA, the conservative organization run by Charlie Kirk, definitely knows how to prioritize both time and money: 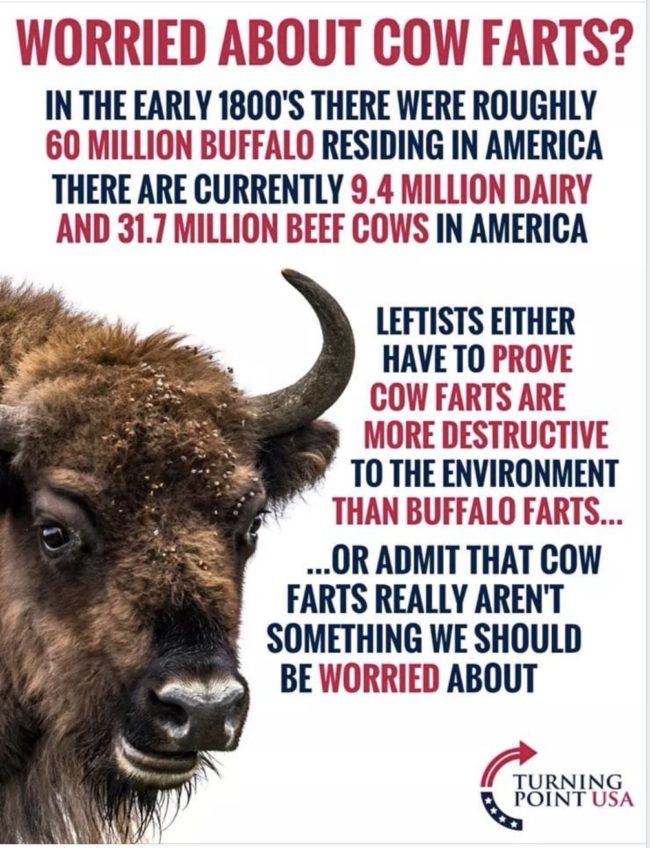 ► Conservative Christian leader Jerry Falwell, Jr. isn’t getting much traction with his claims that pictures of him partying at a Miami nightclub were photoshopped.

► As Denver7 reports, the long-hyped idea of public/private partnerships is being tested in a big way with a massive failure at Denver International Airport.

► Did we mention that there is a new episode of The Get More Smarter Podcast? This week, hosts Jason Bane and Ian Silverii discuss Sen. Cory Gardner’s no-good, very bad summer; the empty Republican bench; and more trouble with the Bureau of Land Management’s pending move to Colorado.