Coffman and Gardner Don’t Like Red Flag Laws, But Don’t Rule Out Backing One Anyway 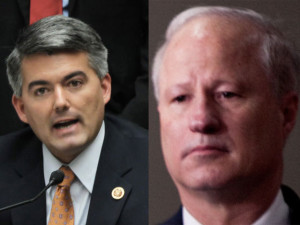 Former Congressman Mike Coffman, who’s now running to be mayor of Aurora, and U.S. Sen. Cory Gardner (R-CO) sound like they are opposed to a red flag law, but if you listen carefully, you’ll hear that neither is shutting the door completely on the policy, which would allow judges to order the confiscation of guns from dangerous people.

Both don’t like Colorado’s red-flag law, in particular, with Coffman saying it’s, “wide open to abuse.”

Speaking on conservative radio this month, Coffman went on to “question the constitutionality of a federal mandate on a red flag law,” stating that if it were “constitutional under the Commerce Clause, then I think it would be horribly done. I mean, it would be done by federal law enforcement, federal courts  — the last thing we want.”

“The Cato Institute has done great work in terms of what due process ought to look like, in terms of making sure that you protect the rights of the individual, protect the Second Amendment,” said Coffman on air. “I think it can be done.”

Coffman’s stance appears to be similar to that of Gardner, who also trashed Colorado’s red flag law, but went on to say on conservative radio that “you could possibly craft a bill to protect the Constitution.”

“I don’t know that you can construct it as they wrote it in 2018 or 2019 — that way,” said Gardner on air, referring to Colorado’s red flag bill, which was signed into law this year by Democratic Gov. Jared Polis, after being pushed by Democrats in the state legislature.

“But what we ought to be focused on, is preventing these kinds of things — these violent acts — in the first place, allowing law enforcement and health care providers and schools to talk to each other,” said Gardner. “I had a round table in Grand Junction, Colorado, where we were talking about the inability of the sheriff to communicate with the school about concerns, or safety concerns or mental health concerns of an individual in the school system or health care system. And so, I think that’s where we ought to focus on, and eliminate the concern that we’re trampling on the Constitution by trying to take an anti-constitutional measure forward.”

In other recent appearances, Gardner has said he needs to study red flag legislation and will ultimately do what’s “right for Colorado”–but after the El Paso shooting, he said, “I don’t support gun control.”

That’s more in line with the impression he left on Rocky Mountain Gun Owners Director Dudley Brown, who opposes all gun control.

“When Sheriff Steve Reams — from Weld County — and I went to Washington DC several months ago, we met with Senator Gardner directly,” Brown told KNUS’ Randy Corporon Aug. 7.  “And both of us know him personally, as well as I know you do and many others. And we sat down with him and asked him where he was on the red flag bill in Congress, and he said, ‘No, I oppose it.’  And he listed all the reasons that, frankly, you and I oppose it.”