In a recent diary here on Colorado Pols, the rating from the National Association for the Repeal of Abortion Laws (NARAL) of Scott McInnis from the 2003 session of Congress was disputed. Using the original printed copy of the Congressional ratings provided by NARAL, it appears to be a small sample size–there were only four votes that McInnis was rated on, two of which were the same piece of legislation with one of them being the final vote on the conference committee.

McInnis received a ‘zero’ ranking from NARAL Pro-Choice America, meaning he supported none of the bills they backed.

A little digging determined that the year they bragged about getting a zero percent rating from NARAL wasn’t exactly their busiest year rating the House of Representatives.

Votes and pictorial evidence below the fold.

In 2003, the four votes that NARAL used to rate members of Congress were:

Of course, all of these votes are in keeping with the claim that Hesse made last year that McInnis was rated 0% by NARAL. They also all came while he was still on the board of Republicans for Choice–when, in 1995, out of 21 votes, McInnis voted with NARAL seven times, or a 33% rating.

And for the record, here is the actual rating from NARAL’s 2003 Congressional Record on Choice: 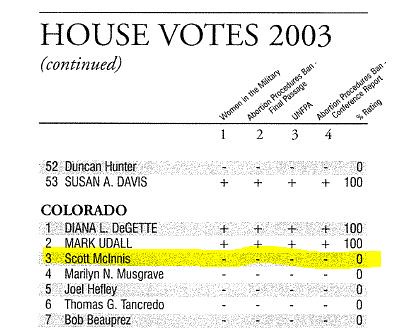