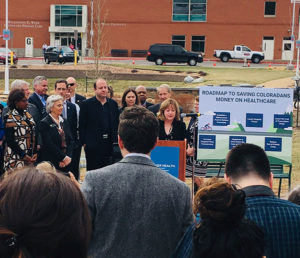 Gov. Jared Polis outlines his healthcare savings plan in April. Note the absence of anyone who looks anything like Sen. Cory Gardner.

As Anna Staver reports for the Denver Post, healthcare costs will decrease significantly next year thanks to legislation passed by the Colorado legislature earlier this year:

Colorado has received federal approval for a new program that is expected to save families who buy health insurance through the individual marketplace thousands of dollars a year, Gov. Jared Polis is announcing Wednesday.

The program, known as reinsurance, is expected to drop premiums by an average of 18.2% when it gets under way in January, state officials estimate…

…The reinsurance program is expected to pool $260 million in state and federal money and use it to cover the costliest medical bills among the 250,000 Coloradans who buy their health insurance on the exchange. Taking that burden off of insurance providers will enable them to lower premiums overall.

Colorado is the ninth state to secure a federal waiver for a reinsurance program. Minnesota’s reinsurance program brought down its 2018 premiums by about 11.3%, and Alaska’s dropped by a statewide average of 26%, according to a Georgetown University Health Policy Institute report.

We noted this impressive 18% savings when figures were first projected by the Colorado Division of Insurance earlier this month. The reinsurance program is part of a broader healthcare savings plan promoted by Gov. Jared Polis and passed by Democrats in the state legislature. This reinsurance program is such a good idea, in fact, that Republican Sen. Cory Gardner is now TRYING TO TAKE CREDIT FOR IT:

GREAT NEWS ➡️ Today @CMSGov approved Colorado’s reinsurance waiver, which will greatly lower the cost of health care premiums in Colorado. I’ve worked with the state and CMS to make this a reality and I’m proud of this bipartisan accomplishment to drive down health care costs. pic.twitter.com/LpBaqjdA9a

This did not go over well with Colorado lawmakers such as State Sen. Kerry Donovan (D-Vail):

Zero calls from @SenCoryGardner’s office and zero support from him over the years we’ve been working on this. Instead, he’s been in DC trying to repeal Obamacare — the very foundation of reinsurance to begin with. But, sure, take credit… #copolitics https://t.co/UMoB3T9ko3 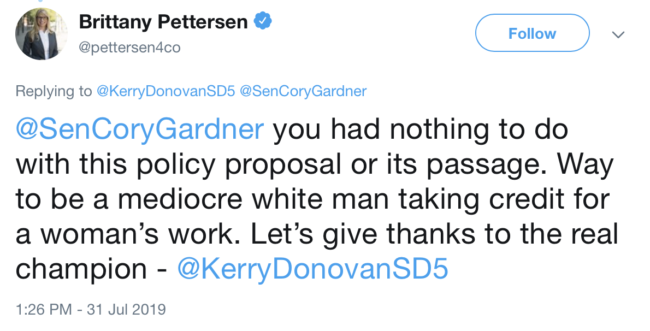 But wait, it gets even more ridiculous. Not only did Gardner have nothing to do with this proposal — his support for getting rid of the Affordable Care Act (ACA) would ultimately kill off the reinsurance deal entirely. As the Colorado Sun reports:

That’s because the Trump Administration — the same one that is expected to sign off on the program — is also backing a lawsuit to strike down the entire Affordable Care Act, the health law that makes a lot of the funding for the reinsurance program possible…

…Earlier this month, a panel of judges at the New Orleans-based 5th U.S. Circuit Court of Appeals heard a lawsuit brought by the state of Texas and others — with the Trump Administration’s backing — arguing that the whole Affordable Care Act should be thrown out. The argument requires its own explainer (like this one), but the upshot from the hearing was that it didn’t gowell for defenders of the health care law. A challenge to the law also known as Obamacare appears headed for the U.S. Supreme Court.

If that lawsuit ultimately succeeds, then Colorado’s reinsurance program in its current form is basically doomed. The subsidies that provide money for the program — and the entire section of federal law that the program lives under — would be gone. Lawmakers would need to do some significant tinkering just to preserve any vestige of it.

This is not the first time that Gardner has been so blatantly duplicitous on the issue of healthcare. In March 2017, Gardner was one of four Republican Senators who signed onto a letter defending the expansion of Medicaid in states like Colorado. A few months later, Gardner voted in favor of a proposal to gut the ACA that quite literally would have ended Medicaid coverage for millions of Americans.

To recap, Coloradans are going to see a major decrease in healthcare costs in 2020 thanks to Gov. Polis and Democrats in the state legislature. Senator Gardner had nothing to do with this and is supportive of federal policies that would destroy this reinsurance plan, but he’s raising his hand like a conquering hero in the meantime.