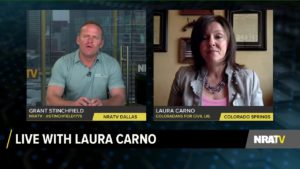 As the New York Times reports, production of new programming at the controversial NRATV outlet operated by the National Rifle Association is ending and the channel will go dark, following a decision by the organization’s leadership after a spate of infighting between the storied gun-rights organization and its unruly media arm:

“Many members expressed concern about the messaging on NRATV becoming too far removed from our core mission: defending the Second Amendment,” Wayne LaPierre, the N.R.A.’s longtime chief executive, wrote in a message to members that was expected to be sent out by Wednesday. “So, after careful consideration, I am announcing that starting today, we are undergoing a significant change in our communications strategy. We are no longer airing ‘live TV’ programming.”

…N.R.A. officials had grown leery of the cost of creating so much live content for NRATV, which was started in 2016, and wondered whether it was worth the return on its investment. The site’s web traffic was minuscule, with 49,000 unique visitors in January, according to a report provided by Comscore.

Some N.R.A. board members and officials were also unnerved by the breadth of its content, which strayed far beyond gun rights and encompassed several right-wing talking points, including criticism of immigration and broadsides against the F.B.I. A show hosted by Ms. [Dana] Loesch that put Ku Klux Klan hoods on talking trains from the popular children’s program “Thomas & Friends” drew outrage from some within the organization.

Although we had no idea that the reach of NRATV was so small, the sudden end of NRATV is nonetheless significant to Colorado politics. Since its founding in 2016, NRATV has heavily featured Colorado pro-gun activists like Laura Carno of Colorado Springs in their programming. This year, NRATV has already devoted generous airtime to the battle in the Colorado legislature over the state’s new “red flag” law to allow for the temporary removal of firearms from persons ruled by a judge to be a danger to themselves or others. NRATV didn’t exist in 2013 when the gun lobby organized recalls against Democrats over the passage of gun safety bills that year, but the outlet would have doubtless played a big role in publicizing the “backlash” against Democrats in 2019 over red flag despite the law’s overwhelming popularity.

Except now, due to a power struggle at the top of the organization’s leadership and a recognition that NRATV has strayed from its core mission into multi-issue right-wing advocacy that divided rank-and-file gun owners, that’s not going to happen. Carno and friends will have to find legitimate media outlets to pitch their stories. And we don’t expect that will be nearly as accommodating as in-house paid media.