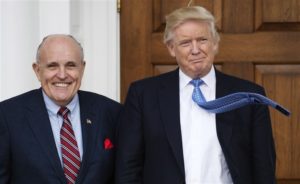 There are some news stories so jaw-dropping that you have to read them two or three times to make sure you’re not hallucinating. So it is with a story in the New York Times in which Rudolph W. Giuliani announces to the world that he is going to Ukraine to pressure that country’s government to use its official resources to assist in President Trump’s reelection effort — by mounting an investigation he hopes will produce dirt on Joe Biden. [Pols emphasis]

Yes, Trump is trying to collude with a foreign government in an attempt to aid his campaign by creating negative stories about a potential opponent. Again.

“Oh come on,” you’re saying. “You’ve got to be exaggerating.” I’m not. The Trump team is apparently streamlining its previous pattern, which was to try to secretly work with a foreign government on its campaign, angrily deny it when it’s revealed and then, when caught by incontrovertible evidence, insist that there was never anything wrong with doing it in the first place.

They’re now skipping over the secrecy and denial parts, and just doing it openly.

Allow us to repeat this in case you thought you were, in fact, hallucinating the first time. As initially reported by the New York Times on Thursday, President Trump’s personal attorney, Rudy Giuliani, freely admits that he is trying to get Ukraine to launch investigations to discredit the Mueller investigation and to politically damage Democratic Presidential candidate Joe Biden:

“There’s nothing illegal about it,” he said. “Somebody could say it’s improper. [Pols emphasis] And this isn’t foreign policy — I’m asking them to do an investigation that they’re doing already and that other people are telling them to stop. And I’m going to give them reasons why they shouldn’t stop it because that information will be very, very helpful to my client, and may turn out to be helpful to my government.”

Mr. Giuliani’s planned trip, which has not been previously reported, is part of a monthslong effort by the former New York mayor and a small group of Trump allies working to build interest in the Ukrainian inquiries. Their motivation is to try to discredit the special counsel’s investigation; undermine the case against Paul Manafort, Mr. Trump’s imprisoned former campaign chairman; and potentially to damage Mr. Biden, the early front-runner for the 2020 Democratic presidential nomination…

…Giuliani said his efforts in Ukraine have the full support of Mr. Trump. He declined to say specifically whether he had briefed him on the planned meeting with Mr. Zelensky, but added, “He basically knows what I’m doing, sure, as his lawyer.”

Somebody could say it’s improper.