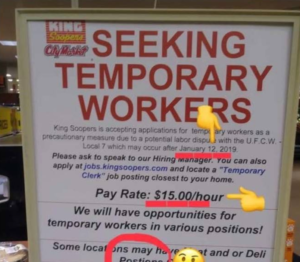 More than 92 percent voted in favor of walking off the job, according to the United Food and Commercial Workers Local 7 union…

A strike date has not been set, but a strike authorization allows union leadership to call for a strike at any moment going forward, according to a release from the union.

UFCW Local 7’s contract with Safeway stores, the other major neighborhood grocer in Colorado, is not affected by this impasse between the union and The Kroger Company. That and the proliferation of grocery options since the last time UFCW workers went on strike in 1996 in theory puts Kroger in a much more difficult position–it’s going to be a very easy logistical decision for consumers who don’t want to cross a picket line to get their groceries somewhere else.

It’s possible that the leverage union negotiators now possess with the authorization to strike in hand will bear fruit in last-minute negotiations that Kroger agreed to following the vote. We’ll update with news on that front–or when it’s time to look at your grocery alternatives–as it becomes available.