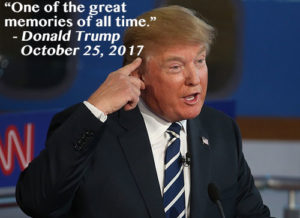 Just a few weeks after he accepted the Republican nomination for President, Donald Trump sat down with Brandon Rittiman of 9News for a wide-ranging interview. As a reader pointed out to us today, Trump actually spoke in favor of local control on the issue of fracking:

RITTIMAN: And while we are on the top of state, local control, fracking is a big issue in Colorado. We actually had a couple of cities here where the voters said they wanted to ban or put a pause on fracking in their city limits. They weren’t allowed to do it by the courts. However you feel about fracking, should voters be able to vote?

TRUMP: Well, I’m in favor of fracking, but voters should have a big say in it. Some areas maybe they don’t want to have fracking. And I think if the voters are voting for it, that’s up to them.

RITTIMAN: Should they be able to ban it in their town if they vote for it?

It’s impossible to say if Trump still believes this — or even if he believed it at the time, for that matter — but with a debate over oil and gas regulations continuing at the State Capitol, it’s interesting to remember that the man who now leads the Republican Party was at one point “feeling the pain” of local communities concerned about fracking.