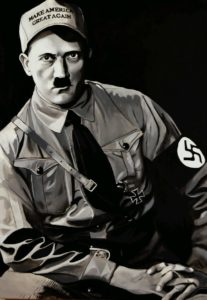 Erik Maulbetsch at the Colorado Times Recorder took note of a controversy early this month after prominent African-American conservative activist Candace Owens headlined a fundraiser for the Boulder County Republican Party. Just prior to Owens’ appearance, video surfaced of Owens making decidedly questionable statements the prior December about Adolf Hitler and Nazi Germany during an impromptu defense of the world “nationalism.”

Whenever we say nationalism, the first thing people think about, at least in America, is Hitler. He was a national socialist. But if Hitler just wanted to make Germany great and have things run well, OK, fine. [Pols emphasis] The problem is that he wanted, he had dreams outside of Germany. He wanted to globalize…

Needless to say, or at least it should be, the assertion that Hitler’s policies would have been “fine” if he had kept them within Germany’s borders is extremely problematic–not least considering the fate of the 160-180,000 German Jews who died during the Holocaust or hundreds of thousands more forced to emigrate. Despite this, Boulder Republicans saw no need to rescind their invitation for Owens to speak at their fundraiser, going so far as to defend her remarks–as the Boulder Daily Camera reported February 8th:

Her comments received criticism and condemnation, including by Colorado’s Democratic leaders. However, Boulder County Republicans said her comments were misinterpreted.

“Yes, I’ve heard about the uproar about Ms. Owens’ comments,” Boulder County Republicans vice chairman Charlie Danaher said in an email, which was also signed by chairman Peg Cage. “But I’m not sure what to make of it. Nothing that she said in any way offered any support of Hitler’s actions. And, from my reading of her comments, any interpretation that her comments were sympathetic of Hitler are off base.” 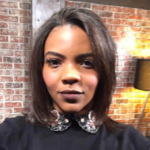 And despite a reportedly small band of protesters outside the event, that was that.

Until late last week! Cassa Niedringhaus at the Daily Camera follows up:

The University of Colorado chapter of Turning Point USA, a conservative organization that has chapters at high schools and colleges across the country, joined several other chapters on Thursday in calling for the resignation of the organization’s communications director…

Although she has the right to express her own thoughts and opinions, the statement said, her comments have been interpreted by others as a reflection on the organization.

“Most recently, her comments about Hitler and nationalism caused a stir,” the statement read. “Was the video cut to make her look like a Hitler supporter? Yes. Do we believe Candace Owens supports the actions of Hitler at home or abroad? No. But this case serves as the perfect demonstration of how simple messages she means to convey become controversial headlining news within a matter of minutes. Again, as the Communications Director, she must know how to communicate professionally and effectively. Understand that when she speaks, Turning Point USA is associated with these comments.”

It’s a remarkable turnabout that we didn’t want to escape mention. After being vociferously defended by local Republicans and even some reporters who bought into the idea that Candace Owens was being “taken out of context,” the student membership of Owens’ own right-wing organization Turning Point USA at the University of Colorado at Boulder took it upon themselves to call for Owens to resign. As of this writing we haven’t seen the end result of this move by several TP-USA affiliates, which presumably means it has created significant turmoil within the organization.

We’d say it ought to provoke some soul-searching among Boulder Republicans, too.