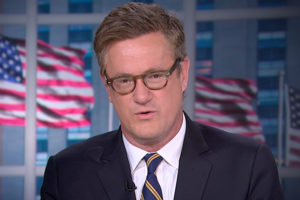 In the Washington Post Joe Scarborough has proclaimed that Michael Bennet is the one! The one Democrat who can unite party hacks and left wing loons into a machine that will defeat the Trumpster! Well he does not quite use those words, but on the basis of the one viral moment that Bennet has ever had Joe thinks that he, “has also shown the capacity to inspire the grass roots.” He also thinks that simultaneously Michael Bennet’s politics could create a, “center-left coalition that could break the logjam of fifty-fifty America.”

Is this a reality based claim or just wishful thinking with lots of weasel words? I’d say the latter is more likely. We can actually directly compare the electoral performance of Bennet vs. Clinton in 2016 here in Colorado. Senator Bennet managed to get 31,780 more votes than Clinton in Colorado when running against El Paso County Commissioner Darryl Glenn. Remember Glenn’s amazing campaign? Against one of the worst candidates in Colorado history Bennet outperformed Clinton by getting 49.97% while she only got 48.16%. Massive! Clearly there is an enormous unmet desire for moderates.

Translated nationwide this could mean that Bennet will win very close to 50% of the popular vote! Unless Darryl Glenn was an easier opponent to beat than Trump. Also if incumbency explained all of the difference (and then some at +2% for a first term Senator) outperforming Clinton might not be so impressive. Also the fact that he outspent Glenn by as much as $14 million to $3 million.

Seriously though, is anyone asking for this? He’s not a terrible Democratic Senator (Hi, Bob Menendez), but he does not have an inspiring story, a great cause, or even an amazing electoral machine. Sure, he’d have the moderate-Republicans-who-wish-everyone-would-just-stop-being-so-extreme vote locked up, but is anyone else actually calling on him to run? Would even his Wall Street donors be excited about the prospect of a Michael Bennet presidency? He’s the human equivalent of a bowl of soggy shredded wheat.