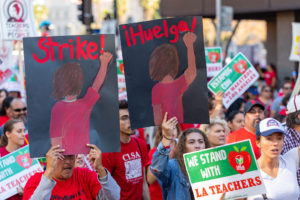 Colorado Public Radio reports on the final breakdown of negotiations last night between Denver Public Schools and the Denver Classroom Teachers Association, ending with teachers heading for the picket lines for tomorrow morning–the first strike by DCTA in a quarter century that has seen enormous change in the operating philosophy of DPS, and a “reform” agenda that has delivered much more controversy than increased achievement:

Tensions boiled over Saturday night as several hours of discussion between the teachers union and Denver Public Schools aimed at averting a strike came to a halt and a Monday walkout appeared inevitable.

Exasperated negotiators for the Denver Classroom Teachers Association ended talks after they asked whether or not Superintendent Susana Cordova would agree to their concept of a salary schedule that gives teachers more opportunities to advance and rewards them for professional development classes.

Cordova wouldn’t give a specific answer and asked for time to consider their counter-proposal. DCTA lead negotiator Rob Gould tersely responded that they “can have some time, they can have until Tuesday!”

What does this mean for almost 80,000 kids who attends Denver Public Schools, not to mention their working parents? Without those thousands of hard-working long-suffering and no matter what they’re getting not paid nearly enough teachers, the district is doing whatever it can to provide a suitable educational setting–Denver7:

Denver Public School Superintendent Susan Cordova reassured parents in late January that the district is committed to keeping schools open during the strike and said an announcement would be sent Sunday notifying parents whether their child’s school would be open the next day.

That will not be the case for all early childhood education classes, which will be canceled due to the district’s inability to meet the rigorous requirements for licensed staff in those classrooms, Cordova said, adding they would try to provide opportunities for the 4,714 children currently enrolled in the district’s early childhood education programs.

Additionally, a DPS spokesperson said a daily assessment would be made as to whether there is an adequate number of teachers and substitute teachers — as well as supervisors from the central office — to keep schools in the district open during the strike.

The school district is expected to have every nonunion employee with a college degree serving as a substitute teacher tomorrow, with an unknown number of temporary teachers hired on the promise of a large daily rate to cover the indignity of crossing a picket line. Obviously, the educational value of the substitutes is going to vary widely, and in many cases it’s reasonable to expect to see whole student bodies watching movies in the gym Monday.

The breakdown between the sides continues to be over the district’s bonus system to achieve staffing goals versus the teachers’ demand for broadly higher pay to offset the growing shortage of teachers and Denver’s skyrocketing cost of living. Underlying this standoff is a larger philosophical disagreement over reforming public education, with the DPS “ProComp” compensation plan and the later “teacher effectiveness” law SB-191 passed in 2010 representing a controversial shift toward blaming teachers for the whole range of aggregate social and economic factors that affect student achievement. Without a positive correlation of better educational outcomes for students to justify this approach, and with a demonstrable and growing shortage of qualified college graduates willing to take on the challenge of a career in public education…what are we doing?

Look, folks, we have no idea how deeply this is going to be reckoned with in the current standoff at Denver Public Schools. But it’s critical to understand–on both sides–that this is much more than an argument over a few percentage points more or less in a contract. This is about a fundamental disagreement over the hardships teachers face in their jobs, and how their work should be both valued and evaluated by society.

If you think you have a slogan that answers all these weighty questions, you don’t.