Thanks For Clearing That Up, Todd Brophy

There’s been a great deal of debate in the last couple of days over an incident Saturday at the Lincoln Memorial in Washington, D.C., caught on video from a number of angles, of a confrontation between a Native American veteran and a group of high school students wearing red “MAGA” hats. The Trump supporter teens were at the tail end of the anti-abortion March for Life, Native American drummer Nathan Phillips had participated in the simultaneous Indigenous People’s March, and still another group of unrelated protesters was on the scene resulting in a toxic brew of mutual antagonism that as of this writing has still not been conclusively sorted out.

Unless you’re Todd Brophy, cousin of longtime state Sen. Greg Brophy and himself the losing 2016 GOP candidate for Aurora’s House District 40, who posted this straightforward interpretation of events to the Facebook page of the Arapahoe County Republicans yesterday: 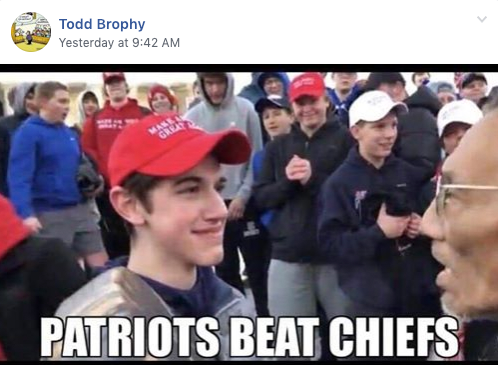 For anyone hoping to see tensions reduced after another racially divisive national news incident, this won’t help.

But unlike at least some of the participants, Todd Brophy isn’t bullshitting you about his reaction.