A Few Words About Democratic Women And GOP Sausage Fests 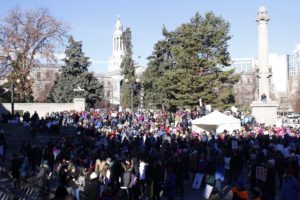 2019’s long MLK Day weekend kicked off with the third annual Womxn’s March in Denver and cities across the nation, and in that spirit Colorado Public Radio’s Bente Birkeland takes stock today of the growing legislative power of women in our state–an historic majority comprised of women in the Colorado House, and continued gains in the Colorado Senate, all of which were realized in 2018 by Democratic candidates:

In 1894, Colorado elected the nation’s first female state lawmakers in three Republican women. However, these days the gender gains mostly happen on the other side of the aisle.

When Democratic Rep. Meg Froelich was sworn in to fill a vacancy left by a male colleague who moved to the Senate earlier this month, she helped cement the chamber’s new female majority 34 to 31 — 26 of those women are Democrats. Overall, the Democratic majority is 41 to 24…

A total of 286 women have served in the General Assembly in contrast to 3,081 men, going back to when Colorado was a territory, according to figures from the Legislative Council. Statehood was ratified in August of 1876. Most of the gains for women in the legislature have come in modern times and in recent years groups like Emerge Colorado have played a role. The local affiliate is part of a national organization working across half of the states in the U.S. Emerge recruits and trains Democratic women to run for office.

Although 2018 saw big gains for both women generally and Democratic women candidates in particular, As Birkeland reports Republicans actually lost two women in the Colorado General Assembly. One reason for this difference has been the robust effort by local Democrats to recruit and train qualified women through organizations like Emerge Colorado, combined with a an affirmative political strategy to field women candidates for which there simply was no equivalent among Republicans. In wins for Democratic women against male Republicans last year, including the ouster of entrenched Republicans like Tim Neville, the results speak for themselves.

But for Republicans, especially the Colorado Senate GOP minority, the one bit of progress we can report is there are finally as many women in their caucus as guys named Kevin! Because one of the two Kevins, former Sen. Kevin Lundberg, was termed out last year. There’s no real way to make excuses for this massive disparity, since from Donald Trump to Randy Baumgardner the reasons are obvious. You can only choose not to care.

And again–in 2018, the results of that strategy spoke for themselves.