David Bernhardt To Guard The Henhouse? Or Not? 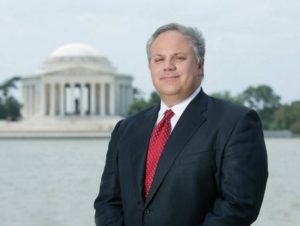 The Phil Anschutz-owned Washington Examiner reports today that Colorado native David Bernhardt remains the top pick by President Donald Trump to serve as the next Secretary of the Interior, though the nomination is for whatever reason taking longer than expected:

Colorado native David Bernhardt, the Interior Department deputy set to become acting secretary next month, is still viewed as Trump’s safest bet to run the agency on a permanent basis, according to allies of his and sources close to the White House.

But Bernhardt has competition for the job, and Trump won’t make a decision this week, as the president is preoccupied with the government shutdown fight, the resignation of Defense Secretary Jim Mattis, and the fallout from his decision to remove U.S. troops from Syria.

David Bernhardt comes to the world of Republican natural resources management by way of former Interior Secretary Gale Norton, also hailing from Colorado. During the Dubya administration, Bernhardt served as “the top lawyer in charge of ethics and legal compliance for President George W. Bush’s Interior Department during a period plagued by scandal and ethical violations” including the Jack Abramoff lobbying scandal that helped end Norton’s political career. Bernhardt stayed on after Norton exited through the revolving door to Royal Dutch Shell–just in time in preside over the fallout from another huge corruption scandal involving the Minerals Management Service and the cheating of American taxpayers by energy companies out of billions in royalties.

In short, Bernhardt is a prime example of the kind of sick joke Trump has made of his pre-election promises to “drain the swamp” of corrupt bureaucrats and the corporate lobbyists who love them, and he has the added distinction of being one of our own! It wouldn’t be a case of Bernhardt being less corrupt than his predecessor, just perhaps a little smarter about it. Call it the benefit of experience over Ryan Zinke, who served just one term in Congress before taking a Cabinet post and wasn’t very good at covering his proverbial tracks.

Maybe there is a more perfect fox to guard this henhouse, but we’d be hard-pressed to name them.