Cory Gardner Does a Saudi One-Eighty

UPDATE: The plot thickens as Sen. Cory Gardner explains his vote against the recent resolution meant to rebuke President Donald Trump and Saudi Arabia to Colorado Public Radio in an interview today:

What we can’t do is weaken our efforts against terrorism. Al-Qaeda, ISIS, the Iranian-back Houthis, and others, who wish to destabilize not only the Middle East but the United States. We cannot confuse the actions [Saudi Crown Prince Mohammad Bin Salman] took with actions that would embolden terrorists. [Pols emphasis] And I think that’s a very, very big concern and should be a concern of every single one of my colleagues.

Call us out if we’re wrong, but it sure seems based on the sum of these latest statements like Cory Gardner has already made up his mind. And Jamal Khashoggi’s life isn’t worth, you know, a big fuss.

We’ve been closely following the reaction of Sen. Cory Gardner, Colorado’s member of the Senate Foreign Relations Committee, to continuing developments in the controversy over the murder of Washington Post columnist Jamal Khashoggi inside the Saudi Arabian consulate in Istanbul in early October. President Donald Trump’s refusal to acknowledge the essentially universal consensus, including that of the Central Intelligence Agency, that Khashoggi was brutally murdered on direct orders from Saudi Crown Prince Mohammed bin Salman, has provoked international condemnation and left U.S. Senators angrily working through their next steps.

Back on November 29th, Gardner appeared on obscure local AM radio host Jimmy Sengenberger’s morning program to answer questions, and Sengenberger brought up the Khashoggi murder. Let’s revisit briefly what Gardner said then:

GARDNER: Again, I think Saudi Arabia needs to be held accountable for — and we need to find out and get to the truth of what happened with Jamal Khashoggi. And that is something that I am committed to doing. I’ve signed a global Magnitsky Investigation on Human Rights and making sure that we punish those responsible, including the royal family that may or may not have been involved in this. And of course, yesterday, you saw the public comments made by Secretary of State Mattis and Secretary — [correcting himself] or excuse me, Secretary of State Pompeo and Secretary of Defense Mattis — that there is “no smoking gun,” I think were the words that they used at the briefing. [Pos emphasis] And so, what I am committed to, is making sure we get the bottom of that. But what I’m also committed to is making sure that Iran doesn’t gain a further stronghold in the Middle East, that terrorists like ISIS or al Qaeda-Arabian Peninsula don’t gain an advantage in Saudi Arabia and destabilize the region, which would devastate our great ally Israel. And so, I think it’s important that we continue to find out who is responsible, [and] hold them accountable, but also not allow Iran, ISIS, and AQ- AP a foothold in Saudi Arabia to destabilize the region which could then spread out to hurt our allies.

SENGENBERGER: One of my concerns though, about the direction things may have to head — at least, in the minds of some — when it comes to Saudi Arabia and Crown Prince Mohammed bin Salman, the heir to the throne, next in line. And he’s being accused — and reports are suggesting that the CIA thinks that he may be the one who gave the order for Khashoggi’s murder. And that would be something–.

GARDNER: [interrupting] Well, I would be careful of what the CIA is being accused of saying. And I think that was clear in a briefing yesterday. I can’t get into the details of it, but I would just be very careful about what the CIA does and doesn’t believe. [Pols emphasis]

SENGENBERGER: Thank you. I appreciate that. But if it were to be found out true that he gave the order, one thing that I’ve been understanding — especially speaking with the gentleman I know you know as well. I’ve interviewed him a few times and talked with the former Ambassador Sam Zakhem about this, and that is in the Middle East, in the vast majority of countries except for Israel and to some extent Lebanon, it seems like you’ve got two situations in most of the countries in the Middle East: bad or worse. And there are a lot of reforms that Mohamed bin Salman has been taking leadership on, and it’s difficult to think of who would be any better than him, with some of the calls for his ouster by many of your colleagues in the Senate. 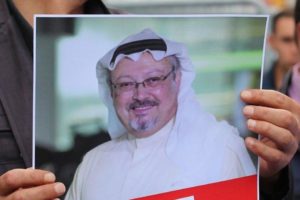 Here we have Sen. Gardner, while allowing for the possibility that the Saudi royal family was involved, closely echoing the Trump administration’s position that there was “no smoking gun” connecting the royal family to Khashoggi’s murder. Gardner went even further to suggest he knew the CIA’s position was not as clear-cut as reported based on some kind of non-public information he possessed based on his briefings.

Well folks, something happened between last week’s interview and today’s quote from Gardner via Voice of America:

“All evidence is pointing to MBS [Mohammed bin Salman] in this horrific murder, and there is no exculpatory evidence that’s been provided by anyone [Pols emphasis] — it’s not there, there’s a reason for that,” Colorado Republican Cory Gardner told VOA. “Holding MBS accountable for these actions ought to take place in the weeks and months to come.”

Wait a minute–all evidence is pointing? No exculpatory evidence “provided by anyone?” If that’s true, then what was Gardner talking about just a few days prior when he claimed he knew something we all didn’t that raised doubt about this very conclusion? There’s a major discrepancy here that needs to be explained, and right away. Gardner has a well-earned reputation for playing both sides of a hot-button issue, and landing wherever he needs at the last moment to save face.

This time, however, Gardner seems to have contradicted himself too much to walk it back.