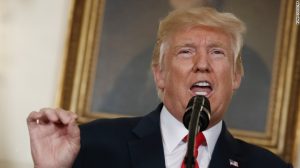 You might think that, for the GOP, hanging a portrait of Trump at the Colorado Capitol, amid inevitable protests and hype, is like begging for another blue Tsunami, even though Colorado Republicans were just flattened then drowned by one, perhaps indefinitely.

But Republican leaders are nevertheless pushing ahead with their plan to erect the Trump portrait by Jan. 4, when the legislature convenes again.

GOP leaders are saying, and it’s true, that Trump is our president, and it’s a tradition to place presidential portraits in our Capitol rotunda.

Trump’s likeness would hang next to paintings of former Presidents Obama, Clinton, and Bush. Like most Coloradans, none of those former presidents likes Trump very much at all, but so what? In America, we respect the office of the president.

Fair enough, and there’s bipartisan support for this. When Republicans were raising money to pay for the Trump portrait last year, some Democrats pitched in, as part of the $10,000 GoFundMe effort. State Rep. Dan Pabon (D-Denver) and former state lawmaker Dorothy Butcher (D-Pueblo) donated, according to Republican organizers.

“Every President – regardless of their political party – deserves a portrait in the Colorado State Capitol,” said outgoing State Senate President Kevin Grantham (R-Canon City) in August news release, calling Trump a “populist” whom many Coloradans support and adding that he can’t wait to see “another beautiful piece of art” in the rotunda.

But just how “beautiful” would it actually be to have Trump staring at you from a Capitol wall?

Already, it’s become passé to say that Trump weakens or undermines our country’s basic institutions and intellectualism, like the judiciary, the press, our voting system, our scientists, law enforcement, our Bill of Rights, and much more.

What will he do next? And how bad will it get?

Reasonable Republicans would agree that Trump is dangerous to the country and a liability to their party–and that we’ll know much more about him in the next year. There’s the expected release of the investigation by Special Counsel Robert Mueller. And more Trump malfeasance will potentially be uncovered thanks to Democratic control of the U.S. House of Representatives. 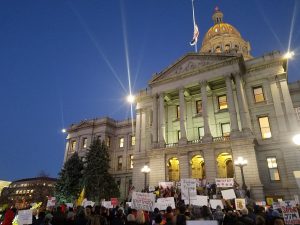 So why not see what the future holds for Trump, before erecting the portrait?

Why not wait a while, and possibly use the Trump portrait to mark the enlightenment of the Colorado Republican Party?

How to do this?

In time, if things continue to go south for the president, a different artistic vision may emerge that could reflect the public’s view of Trump —and benefit Republicans politically–while honoring the valid belief that all presidents deserve a spot on the Capitol wall.

Republicans may eventually agree that the best thing they can do for themselves and for Colorado would be to erect a portrait depicting Trump in a less favorable manner, perhaps behind bars. Or with Stormy Daniels.

Or, on the subtle side, Trump at Mar-a-Lago. Or even walking in a shameful posture, with his head bowed.

Or maybe below the portrait, Republicans simply add a play-on-demand audio recording of Trump saying words that make no sense at all.

Or, if the Mueller investigation shows collusion with Russia, how about a painting of Trump with Putin?

Any one of these portraits would help the GOP show Colorado voters, who already mostly dislike the president, that they don’t approve of Trump either.

Even U.S. Rep. Mike Coffman of Aurora, who blames Trump for the loss of his congressional seat this month, should support the idea–because he knows better than anyone that the GOP has to separate from Trump to have a prayer in 2020 and beyond.

That’s why this crazy-sounding proposition is serious. The GOP would be better off not hanging a painting of Trump at this moment.

Republicans really should consider commissioning an unflattering Trump portrait as part of a GOP rehabilitation program in Colorado—and to tell the world that Colorado objects to this president, while giving his office due, but not blind, respect in the Capitol rotunda.