Jeffco GOP Ballot Guide Leans Far Right, Except When It Comes To Amendment 74 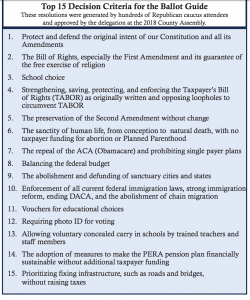 The Jefferson County Republican Party has issued a ballot guide that neatly lays out the Republican right wing agenda, even though the Jeffco area is known to be among the purplish parts of state.

But when it came to Amendment 74, a far-reaching attack on the government’s ability to impose even the most modest health and safety regulations without potentially facing unsustainable financial liabilities, Jeffco Republicans joined a growing list of moderate Republicans in holding back support.

It took “No Position” on Amendment 74, but its comments were rather gloomy.

The guide states under the column of “Conformance with Republican Platform and Constitution:”

Unknown impact as this constitutional amendment has far-reaching implications. Just compensation is already guaranteed under the Colorado and US Constitution.

Under “Fiscal Impact,” the guide continues with this comment about Amendment 74:

It is likely there will be substantial financial impact to taxpayers as they will be on the hook for all future judgments.

Called the “Top 15 Decision Criteria for the Ballot Guide,” the document suggests voters should aim to advance the following policies (paraphrased from the guide above):

Concealed Carry in Schools. Allowing guns to be carried by trained teachers and staff in schools.

Vouchers. Calling for vouchers, which would deplete public schools by allowing the use of tax money for private schools.

End DACA. Eliminating the protections from deportation for undocumented children, who were brought to this country illegally by their parents and know no other home.

Abortion Ban. Defining life as beginning at conception and therefore outlawing all abortion, even for rape and incest.

Kill Obamacare. Repealing the Affordable Care Act (ACA), which would throw an estimated 400,000 low-income people off the health insurance rolls.

The resolutions that make up the guide were approved by hundreds of GOP caucus goers and by the Jeffco Republican delegation at the country GOP convention.