Of Water Calls and Water Boys 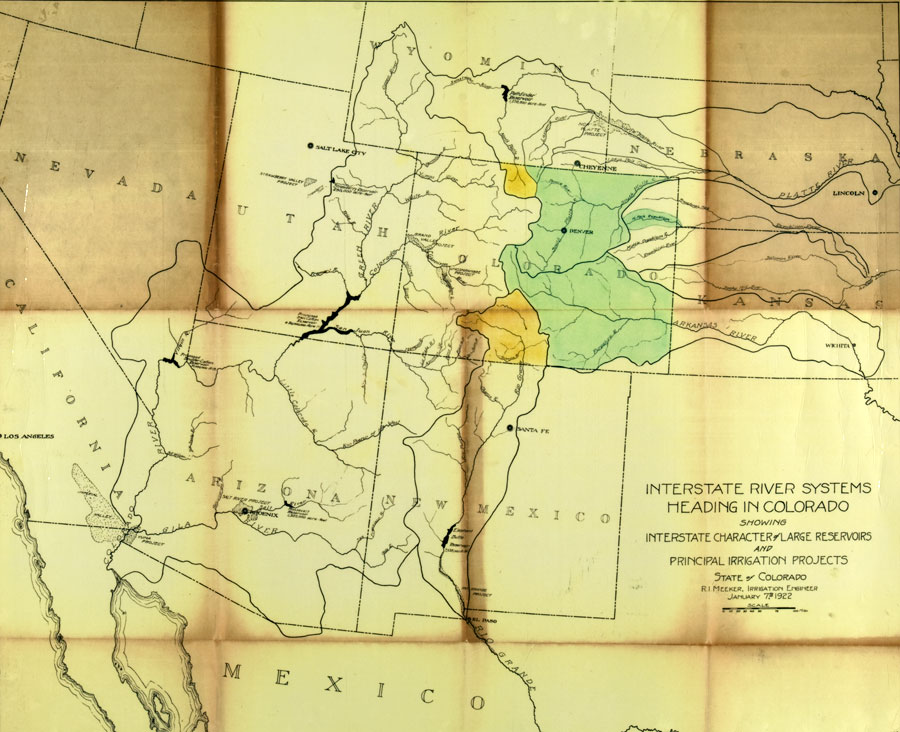 Efforts to divide up the waters of the Colorado River between states began in the early 20th century.

Talk was heard this summer in water circles, of a scary scenario coming to pass should the rivers keep shrinking: A call under the 1922 Colorado River Compact, which parcels up the Colorado River (and its tributaries) among seven thirsty states, and divides its flows between “upper” and “lower” basins. A Compact Call would require the delivery, by any means necessary, of 7.5 million acre-feet from the Upper Basin to Lower Basin States. As Luke Runyon reports:

The mention of one plausible future scenario along the Colorado River is enough to make some water managers in the West break into a sweat. It’s called the Compact Call, and even though it’s never happened — and is years away from ever happening — its invocation conjures up dystopian imagery of a southwest battling over scarce water supplies. 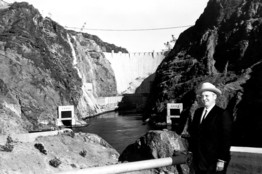 Bureau of Reclamation chief Floyd Dominy at Hoover Dam in 1963.

It was a frenzy of dam-building under BuRec’s glory days, chronicled by Marc Reisner in Cadillac Desert, that put much of the infrastructure in place to regulate the flows of the Colorado and its tributaries across the region in the 1950s, 60s, and 70s — and to be able to mange to meet the Compact.

Part of the upper Colorado River Basin Storage Project, the Aspinall Unit is a series of high reservoirs in western Colorado. The uppermost is the most familiar, and Colorado’s largest water body Blue Mesa Reservoir. This set of dams and reservoirs serves the purpose to be able to guarantee the Upper Basin can provide the necessary flow to meet the Compact agreement to the Lower Basin.

Together, Blue Mesa Dam, Morrow Point Dam, and Crystal Dam developed the water storage and hydroelectric power generating potential along a 40-mile section of the Gunnison River while also regulating the flow of the river and in turn, assisting in the regulation the Colorado River.

And despite the excitement that high elevation storage still elicits in some water buffaloes, as well as with politicians who want to propose things that sound like solutions, more dams and bigger pools won’t necessarily do it.

In a future marked by climate change, more storage won’t help that much. Currently Blue Mesa Reservoir levels are at about 39% capacity, and local lore says this part of the state has not seen a drought this deep in over eighty-five years.

The bottom-line is we need to prepare for a future with less water, and warmer temperatures. The low levels and high temperatures in our state’s largest water body is not only frightening for what it portends of these changes we have wrought already in our climate, now coming due. The warming is also leading to another, direct and immediate hazard: Blooms of toxic algae, as reported by the Denver Post.

The National Park Service has found toxic algae in a section of Blue Mesa Reservoir, near Gunnison, and is asking people to exercise caution when using the reservoir.

The park service said it has sampled, analyzed and determined the presence of cyanotoxins in the Iola Basin section of the Blue Mesa. Other areas of the reservoir may contain toxins as well, according to a news release.

…People or animals exposed to the Blue Mesa water and exhibit nausea, vomiting, digestive distress, breathing problems, seizure or unexplained illness should contact a medical professional, the park service said. Testing is ongoing at the reservoir.

In fact, algal blooms are yet another indicator of climate change, and the excessively hot days of 2018 has led to the Summer of Algal Bloom – all across the country – and which are worsening, right on cue, as the globe warms.

Even Trump’s EPA  for the time-being still agrees that climate change drives more algal blooms, and that that is a problem, harming human health and costing corporations dollars.

Scientists predict that climate change will have many effects on freshwater and marine environments. These effects, along with nutrient pollution, might cause harmful algal blooms to occur more often, in more waterbodies and to be more intense.  Algal blooms endanger human health, the environment and economies across the United States.

This summer the problem has been making headlines across the nation  (and beyond), as noted in this report out of New York State.

An explosion of toxic algal blooms is degrading lakes across the state and country — more than 150 were reported in New York state in 2017.

The Summer of Algal Blooms has seen dangerous blooms inland, on our lakes and streams, and in our oceans. Impacts are being noted from the east …

For swimmers at Lake Anna, summer ended early this year. The lake, located about an hour northwest of Richmond, has been home to algae blooms that can cause rashes and gastrointestinal illness …

All the way out west …

For the first time in Oregon’s history, toxins from a nearby algae bloom had made their way into a city’s tap water.

Massive fish kills in the Great Lakes have marked the “unprecedented” blooms of 2018.

From an “unprecedented” bloom that hit the Great Lakes, though unusual blooms in the southwest and Mountain West, to the historic “Red Tide” bringing economic and ecological mayhem across the Gulf Coast. Climate change is real, it is here, and it is bringing with it costly, harmful consequences.

The algal bloom on Blue Mesa Mesa Reservoir, stressed and shrunken from drought, ought be an alarm bell to our elected representatives, our U.S. Senators, Congressional Members, state, and local leaders. It ought to be the shout that demands a course correction, an immediate change in direction. In DC, some lawmakers are debating how to address the Summer of Algal Blooms and the tremendous impact it is having to ecosystems and economics across the nation.

Lawmakers spar over how to deal with algae blooms

This summer’s health threat scaring lawmakers on Capitol Hill is algae, which has caused a literal stink along the Gulf of Mexico coast, chased fishers away from the Great Lakes, and left Alaskan tribes wondering if their shellfish is poisoned with toxins. 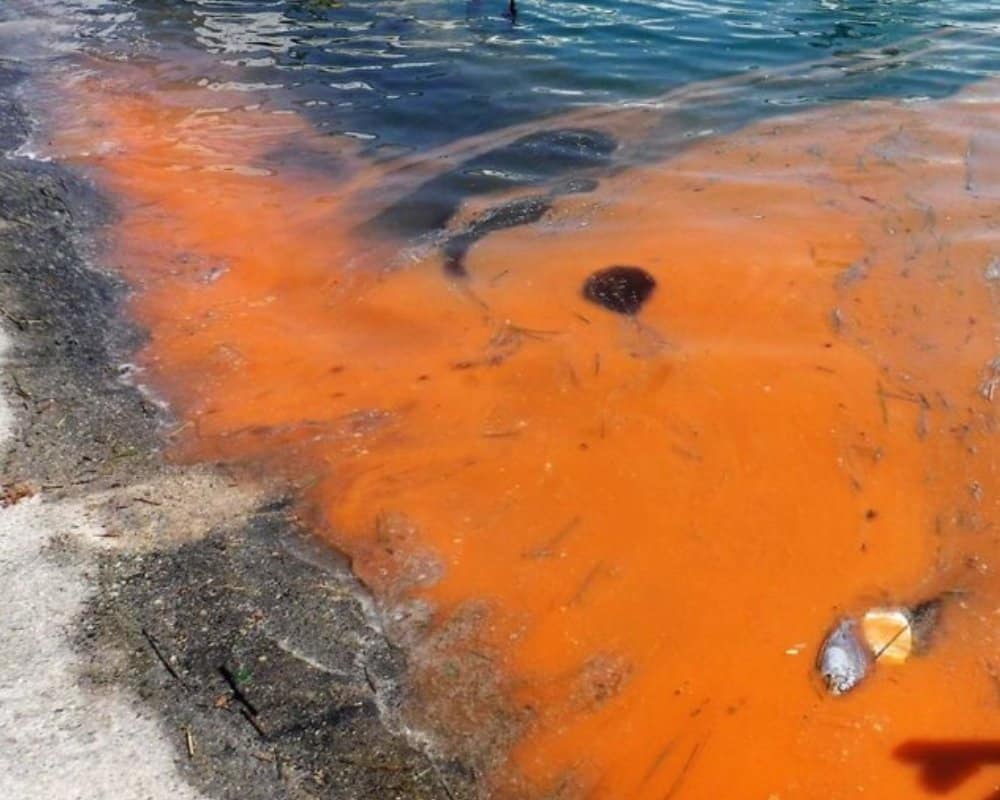 But for the most part the same games are being played, finger-pointing and last-minute band-aids and not enough meaningful climate action. It is time to meet the challenge head-on. We must prepare for a warmer future, but until we address our pollution that is driving the whole system toward this less hospitable and less habitable change, our adaptions will never suffice.

Leadership means making hard choices, and it requires taking initiative and showing up. Dodging constituents, to stage happy talk with boosters and buddies, will not make the cut. Coloradans deserve to know where our Senators stand on climate change, and what their action plans are to address it – both to adapt to its impacts today, and to move us toward a post-carbon energy economy.

More dams, more pipelines, more of the same is not the way forward. We will need to do better stewarding our precious water resources. And we must shift now to a low-carbon economy.  Both challenges will mean poking some powerful interests in Colorado – including water buffaloes, the mining industry, and the petroleum lobby.

But there are also steps that even a cautious politician can take now. Ways forward that provide common-sense and popular solutions to address climate pollution and incentivize the shift to cleaner alternatives.

These steps are only a tepid beginning — initiatives like the Clean Power Plan, the clean car rule, and methane venting rules. But they are steps in the right direction. Undoing these small efforts — as the Trump administration has done egged on by the Republican Congress —  is an affront to the future and a failure of leadership.  The consequences are coming due, but the water boys for the status quo are simply scurrying for the next excuse.