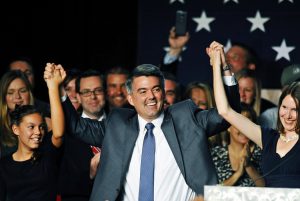 A Republican leader of the U.S. Senate worries that “loony left” voters could create a “problem” for Republicans in the November election, leading Democrats to victory.

“Obviously, voter motivation and intensity is important in elections,” U.S. Sen. Cory Gardner told a KHOW radio host Ross Kaminsky Thursday. “And if more on the radical left, the loony left, get out and vote than the right, that’s a problem.”

An call to Gardner’s office seeking to know who the “loony left” is (e.g., protesters at the women’s marches?), where they have the most power (e.g., Colorado? Florida?), and if Gardner has plans to try to stop them from voting (e.g., by calling them more names?) was not answered.

Gardner’s comment about the “loony left” came in response to a question about whether the upcoming election will be a “referendum on President Trump.”

Gardner replied that “you never  know” and that he’s seen different polling results on the topic.

“I don’t know if [this election] is any different than any other election,” said Gardner on air.

In the wake of the massive women’s marches in 2016, Gardner characterized protesters and critics of his policies in similarly degrading terms, calling them “fake” while providing scant evidence of their fakeness.

“What I worry about though, of course, is the paid protesters from out of state who are crowding out those Colorado voices,” Gardner told 9News’ anchor Kyle ClarK Feb. 2. “That’s a big concern of mine. It’s a concern of my colleagues, when they can’t hear the voices of their constituents because paid activists from out of state are getting in the way.”