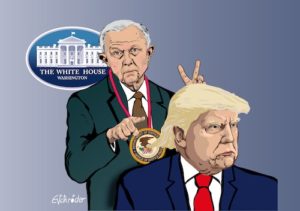 As Bloomberg News reports, two Senate Republicans are paving the way for President Trump to fire Attorney General Jeff Sessions — but Trump has to wait until after the mid-term elections:

Two key Republican senators signaled to President Donald Trump that he could replace Attorney General Jeff Sessions after the midterm elections in November, a move that would open the way for firing Robert Mueller or constraining his probe into Russian meddling in the 2016 election.

“The president’s entitled to an attorney general he has faith in, somebody that’s qualified for the job, and I think there will come a time, sooner rather than later, where it will be time to have a new face and a fresh voice at the Department of Justice,” Senator Lindsey Graham of South Carolina, who may be in line to head the Judiciary Committee next year, told reporters Thursday. “Clearly, Attorney General Sessions doesn’t have the confidence of the president.”

Senator Chuck Grassley, the current Judiciary chairman, also changed his position on Thursday, saying in an interview that he’d be able to make time for hearings for a new attorney general after saying in the past that the panel was too busy to tackle that explosive possibility.

Not all Senate Republicans are ready to sign off on Sessions’ execution, however. Texas Sen. John Cornyn and Maine Sen. Susan Collins are among the Republicans quoted by  Bloomberg voicing opposition to removing Sessions — particularly while Trump is still under investigation from special counsel Robert Mueller.

Trump has made no secret of his disappointment in Sessions for not adequately protecting him from the investigation into potential collusion with Russia. Sessions has been largely quiet about Trump’s repeated barbs until today. As CNN explains:

“While I am Attorney General, the actions of the Department of Justice will not be improperly influenced by political considerations. I demand the highest standards, and where they are not met, I take action. However, no nation has a more talented, more dedicated group of law enforcement investigators and prosecutors than the United States,” Sessions said in a statement…

…The assertion from the attorney general that he has in fact taken control of the Justice Department comes after the President lashed out at Sessions in an interview that aired on Fox News Thursday morning.

If Democrats are able to take control of the Senate, this entire story becomes much more complicated. It’s strange to think that Sessions might be silently rooting for a Democratic majority in November.