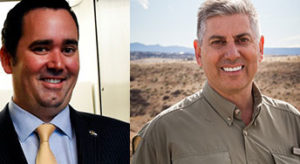 After yesterday’s remarkable video in which 2018 GOP gubernatorial runner-up Victor Mitchell called on President Donald Trump to resign, today Mitchell takes shots in Westword at the shady primary campaign run by Republican nominee Walker Stapleton–touching on the whopping lies Stapleton told during the primary and refused to correct as well as unresolved questions about the role of Stapleton’s “SuperPAC” committee, for which Stapleton himself raised money for while delaying his all-but-official entry into the race:

When asked about campaign lows, Mitchell says, “My opponent [Stapleton] spent over $1 million of dark money making up outright lies and smears — and when we went to the media and said, ‘These are lies,’ they wouldn’t take the lies down.”

…Likewise, Mitchell rails against “the unlimited dark money polluting our whole political process on both the Democrat and the Republican side. It’s flat-out disgusting. We don’t know who gave the millions to my opponent who won. He’ll never disclose it, but those ads were strategically aimed at targeted communities against me.”

Candidates are forbidden from coordinating with outside organizations, but Mitchell argues that the ads created by those that helped Stapleton “were all overlapping, all on message to what my opponent wanted to say. So we need to get rid of all this dark money. And it’s not about First Amendment rights, since 99.99 percent of the population can’t afford to fund these dark-money PACs. They’re being funded by very wealthy donor groups and corporate interests, and they’re the kind of thing that’s ultimately going to ruin our democracy.”

Despite a story loaded with hard shots on Walker Stapleton’s integrity, Mitchell pays lip service in this story to backing the Republican nominee like a good soldier. But between this lamentation of Stapleton’s deceptive campaign tactics and Mitchell’s call yesterday for Donald Trump to either resign or be impeached, you get a strong sense that Mitchell’s heart isn’t in a Republican victory this year.

And after the elections, Mitchell may have credibility a lot of fellow Republicans will by then be lacking.