When it came to the campaign finance violations, Cohen implicated the president directly. He told the court that he worked with Trump to pay off two women to keep their stories of alleged affairs with Trump from becoming public before Election Day.

An attorney for the president did not immediately respond to requests for comment.

Cohen told the court that “in coordination with and at the direction of a candidate for federal office,” he and the chief executive of a media company worked in the summer of 2016 to keep an individual from publicly disclosing information that could harm the candidate. And he said he worked “in coordination” with the same candidate to make a payment to a second individual.

“I participated in this conduct . . . for the principal purpose of influencing the election,” he said. 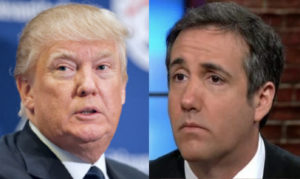 Cohen is expected to plead guilty to charges related to bank fraud, tax fraud and a campaign finance violation, according to two people with knowledge of the situation.

A hearing in the case is scheduled for 4 p.m. Tuesday at a federal courthouse in Manhattan. Afterward, Deputy U.S. Attorney Robert Khuzami, who has been overseeing the probe, is scheduled to make public remarks…

…It’s not clear if Cohen has agreed to cooperate in the ongoing special-counsel investigation surrounding Trump. But a plea agreement by Cohen — long the self-professed “fixer” for Trump — could ratchet up the legal pressure on the president.