But the Future Water Supply is Uncertain 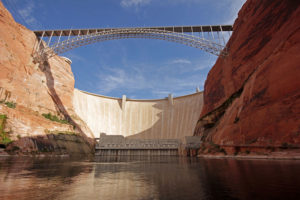 For the last 18 years the Colorado River Basin and the southwestern states supplied by the river have been dry. How dry? The Department of the Interior said in 2016, “the Basin has experienced its lowest 16-year period of inflow in over 100 years of record keeping”. KUNC published an article in March asking, “When a drought lasts 18 years, does it need a new name?”

Despite the low flows and droughts the users of the Colorado River have not had to cut back much. In 2001 the lower basin states (Arizona, California, Nevada) and Mexico used 9.974 million acre feet (maf) of water. In 2017 the lower basin states and Mexico used 8.296 maf. The August 16 report that prompted the associated press news story projects that there will be no cutbacks in 2019 either. Being news organizations they made the 52% chance of cutback in 2020 their headline, because fear doom and gloom sell better than hotcakes. Weirdly. Myself, I prefer a nice stack of wheaty cakes with butter to bad news.

Under the current rules if Lake Mead is lower than 1075 above sea level on January 1 of a year then there will be mandatory cuts of 320,000 acre-feet for Arizona, 13,000 acre-feet for Nevada, and 50,000 acre-feet for Mexico. That is 11.4% of the water Arizona uses in a year, so now is not the time to get a vacation home in the Valley of the Sun.

We here in Colorado and the other upper basin states will not feel the pinch directly unless Lake Powell runs dry. We are obligated under the Colorado River Compact to ensure there is at lest 8.2 million acre feet of water for the lower basin to use each year (7.5 for the states and 0.7 for Mexico). Then it is possible that we will have to cut back, though it gets complex because it is an average over 10 years. In most years up to now we’ve actually been sending 9.0 maf down the river so there is a potential cushion depending on how lawyers interpret the agreement.

Needless to say if the lower basin decided to invoke a “call” on the river it would head to court at a speed somewhat faster than bad news, itself known for breaking the speed of light under laboratory conditions.

The bottom line we are fine for now and sitting at around a 50-50 chance of mandatory cutbacks in 2020 for Arizona, Nevada, and Mexico. Further out it gets even more murky with the potential for everyone feeling parched if the winter snow average does not improve.