Joey Bunch of the Phil Anschutz-owned Colorado Springs Gazette ran a puff piece this past weekend celebrating recipients of the so-called “Pinnacle of Prosperity Award,” handed out by Koch Brothers-funded political advocacy group Americans For Prosperity:

“These members have shown a commitment to building an environment where individuals and small business can succeed,” AFP state director Jesse Mallory said in a statement. “Through their hard work in Denver, more Coloradans are realizing the benefits of a smaller government footprint in their everyday lives. And they must continue their focus on removing government barriers that impede success and implement policies that empower individuals.

“We hope these members will continue to lead the charge on passing occupational licensing reform so more Coloradans can chase their dream, enhancing education freedom so our children get the individualized attention they deserve, and defending TABOR against big-government spenders that only want to expand government’s ill-advised reach.”

What a prestigious honor, isn’t it? Honoring these legislators’ “hard work in Denver” to “empower individuals,” making sure “our children get the individualized attention they deserve!”

Keep that last one in mind: 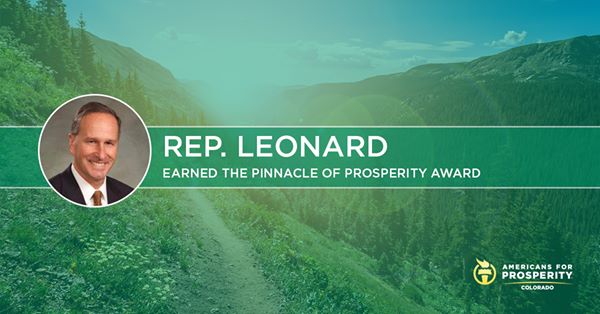 Because AFP Colorado given a “Pinnacle of Prosperity Award” to none other than Rep. Tim Leonard of Evergreen, one of the worst examples of an “own goal” in recent memory. As we’ve had the unfortunate duty of recounting in this space, Leonard’s idea of giving kids “the attention they deserve” consisted of going to jail for contempt of court in 2016 rather than cooperate with his ex-wife on his kids’ educational needs. Last month, Leonard attempted unsuccessfully to reduce his child support obligations by claiming his work as a legislator–yes readers, that “hard work in Denver”–was too time-consuming to keep his secondary employment.

It doesn’t matter how Rep. Leonard may have scored on some list of votes. By giving Leonard this award after he shamed his office and the Colorado General Assembly as a whole, trying to use his elected office to cheat his own kids, AFP has taken proud ownership of one of this year’s biggest disgraces in Colorado politics.