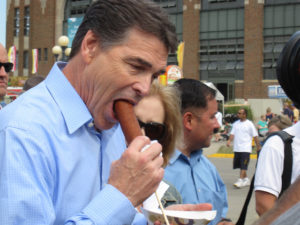 On Tuesday, August 14, 2018, U.S. Secretary of Energy Rick Perry will travel to the Department of Energy’s (DOE’s) National Renewable Energy Laboratory in Golden, CO. While there, he will tour the Energy Systems Integration Facility and the Science and Technology Facility with Senator Cory Gardner. They will see first-hand the wide range of research and development being conducted at the lab – from high-performance computing to solar materials research.

Perry and Gardner will also stop by the NREL Partner Forum and then provide open press remarks and answer employee questions at an all-hands meeting. Following these events, they will hold a brief media availability.

Readers will recall that now-Secretary Perry famously pledged to abolish the Department of Energy if elected President–sort of, since he couldn’t remember the name of the agency when pressed to identify which departments of the federal government he would abolish in a debate. Once Donald Trump nominated Perry to serve as the Secretary of the very same Department of Energy–which we assume, when you get right down to it, was Trump making some kind of joke–Perry expressed “regret” at having made such a rash policy prescription.

Whatever the fate of the Department of Energy as a whole, NREL itself has been subjected to several periods of uncertainty by Republican administrations and Congresses, but it does appear that the GOP has bigger fish to fry between now and the November elections. That is, staying in power, and kicking renewable energy to please the fossil fuel industry isn’t a good look for Republicans going into this particularly hostile midterm.