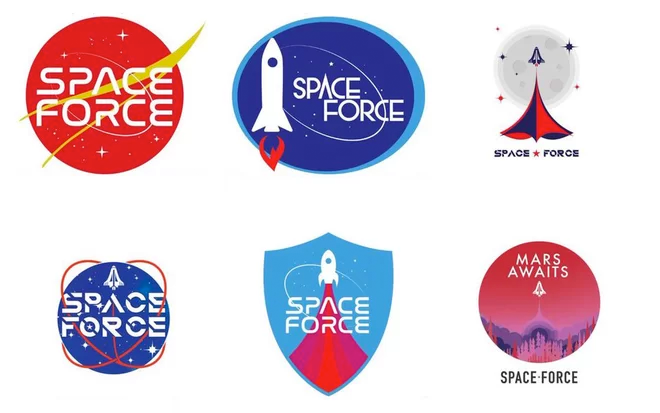 According to astronaut Mark Kelly and plenty of other experts, Donald Trump’s Space Force is, simply put, a pretty dumb idea. Nonetheless, last night the president’s reelection campaign released a slew of possible Space Force logos–and they’re right in line with the stupefyingly bad design Trump’s team is known for (see: Exhibit A and Exhibit B).

Trump and Vice President Mike Pence announced the Space Force concept last June, proposing a new branch of the military that will be aimed at space. “We are going to have the Air Force and we are going to have the Space Force, separate but equal,” Trump said at the time. The idea was met with widespread derision from Kelly and others, for several reasons. The United States already has a Space Command. It’s been around since 1982. Space defense is also one of the U.S. Air Force’s core missions, which currently involves monitoring space from natural and third-country threats, protecting military satellites, and foiling Mulder and Scully’s efforts to unveil an alien conspiracy to take over Earth.

…They weren’t created by anyone at the Pentagon, NASA, or any other federal agency. They were created by the Trump-Pence 2020 campaign PAC. And, as Parscale notes, they’re going to be used to “commemorate” the Space Force with a new “line of gear.”

Given that the whole business of a “Space Force” is more a distraction for diehard supporters from the daily crush of scandal and incompetence that defines Donald Trump’s presidency for most Americans, it’s completely fine that the campaign came up with these logos as opposed to an official agency! We wish that something similar could be devised for Trump’s upcoming military parade, for example, so the actual military wouldn’t be sidetracked to the tune of millions of dollars by a show intended to gratify the ego of one individual.

If you have time to whip up your own version of a Trump Space Force logo (we do not), please go for it and post the result in comments. Or have your kid make one. With crayons. It would be as good, and just as real.