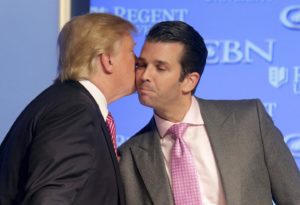 This may be the most important paragraph of Donald Trump’s presidency:

“Michael Cohen, President Donald Trump’s former personal attorney, claims that then-candidate Trump knew in advance about the June 2016 meeting in Trump Tower in which Russians were expected to offer his campaign dirt on Hillary Clinton, sources with knowledge tell CNN. Cohen is willing to make that assertion to special counsel Robert Mueller, the sources said.”

Let’s take a quick step back for some context. The June 2016 meeting between a group of Russians and the top brass of the Trump campaign, including the candidate’s eldest son and son-in-law, has long been at the center of questions — from special counsel Robert Mueller and others — about whether there was any sort of collusion between a foreign country and the Trump campaign in 2016. When news of the meeting first broke, Donald Trump Jr. insisted it was a brief and unimportant gathering focused on an obscure adoption law that the Russians wanted changed.

For his part, President Trump continues to insist that he knew nothing about the now-infamous “Trump Tower meeting.” But as Philip Bump agrees for the Washington Post, Cohen’s words are really, really, really bad news for Trump.