The Heat is On: Colorado’s Leaders Must Act on Climate

The horrific and deadly wildfires that have swept through Greece are just one set of data points causing scientists around the world to sound the alarm, that human-driven climate change is “supercharging a hot and dangerous summer,” as the Washington Post reports:

In the town of Sodankyla, Finland, the thermometer on July 17 registered a record-breaking 90 degrees, a remarkable figure given that Sodankyla is 59 miles north of the Arctic Circle…

…Japan recorded its highest temperature in history, 106 degrees, in a heat wave that killed 65 people in a week and hospitalized 22,000, shortly after catastrophic flooding killed 200. …Ouargla, Algeria, hit 124 degrees on July 5, a likely record for the continent of Africa. And the 109-degree reading in Quriyat, Oman, on June 28 amazed meteorologists because that wasn’t the day’s high temperature. That was the low . It was the hottest low temperature ever recorded on Earth.

Summer 2018: Drought has gripped much of the United States all year.

It has been an especially hot summer across the United States. Much of the nation remains in the grip of an epic heatwave.

Closer to home. Southwestern and Southeastern Colorado remain in an exceptional drought, as fires that raged for over a month continue to burn. Colorado’s farmers–from Yuma to Cortez–are in a world of hurt, as crop failures loom.

Of course it’s not just Colorado farmers. Economic calamity from climate change, and the failure of leaders to address it, is likely to be significant by all accounts, as the Insurance Journal summarizes:

The World Economic Forum ranks extreme weather as the top global risk in terms of likelihood and second-biggest in terms of impact, while the WMO says episodes of extreme heat and precipitation are increasing due to climate change.

Everywhere, it seems, is seeing the impacts of extreme weather. Even as fires rage and a heatwave grips much of the nation, massive flooding has swamped other parts, as USA Today reported yesterday:

Heavy rains pounded much of the Mid-Atlantic and deep into upstate New York for a fifth day, bringing little relief to the waterlogged region Wednesday.

Meanwhile, across the nation, almost 40 million people from Washington state to Arizona were dealing with a dangerous heat wave, the National Weather Service said.

Scientists from the National Oceanic Atmospheric Administration say the fingerprints from climate change are incontrovertible. The Washington Post article notes:

The brutal weather has been supercharged by human-induced climate change, scientists say. Climate models for three decades have predicted exactly what the world is seeing this summer.

And they predict that it will get hotter — and that what is a record today could someday be the norm.

“The old records belong to a world that no longer exists,” said Martin Hoerling, a research meteorologist at the National Oceanic and Atmospheric Administration. 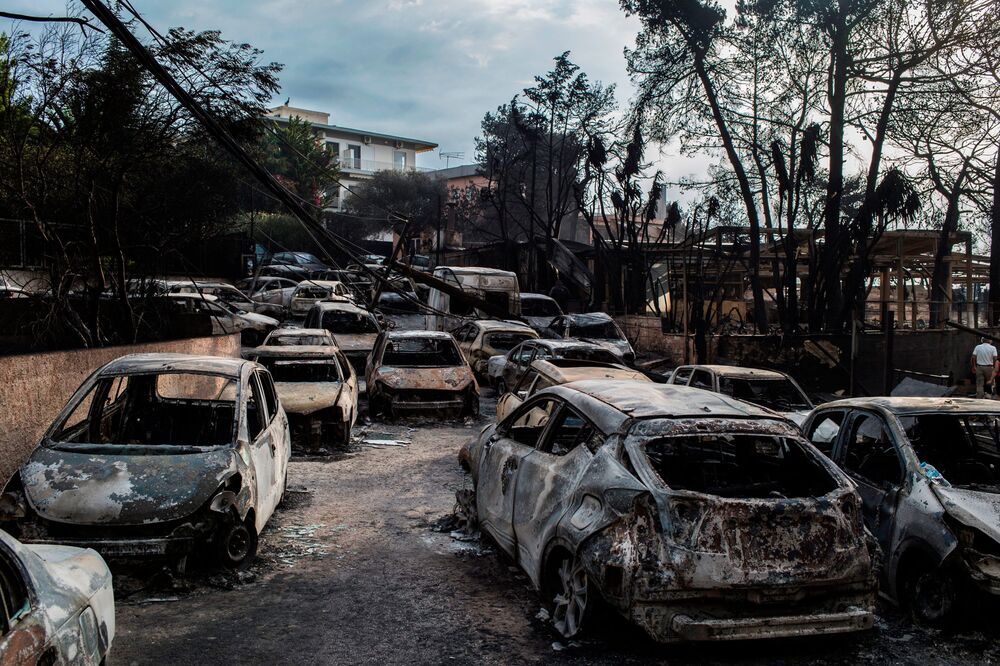 In Europe, likewise facing a summer of heat waves and floods, scientists also point squarely at climate change, as The Guardian reports:

The heatwave searing northern Europe was made more than twice as likely by climate change, according to a rapid assessment by scientists.

The result is preliminary but they say the signal of climate change is “unambiguous”.  … “The logic that climate change will do this is inescapable – the world is becoming warmer, and so heatwaves like this are becoming more common,” said Friederike Otto, at the University of Oxford and part of the World Weather Attribution (WWA) consortium that did the work. Floods, in North America, in Europe, in Asia–where hundreds of people have perished–like heat waves, wildfire, and drought: are all known consequences expected to worsen from climate change.

The European scientist from the study cited above explains the obvious: We need to get ready for more extreme weather, and we need to act as quickly and boldly as possible to transition to a low-carbon future.

“What was once regarded as unusually warm weather will become commonplace, and in some cases, it already has,” she said. “So this is something that society can and should prepare for. But equally there is no doubt that we can and should constrain the increasing likelihood of all kinds of extreme weather events by restricting greenhouse gas emissions as sharply as possible.”

The Time to Act on Climate is Now

The signals are clear and cannot be ignored despite challenges involved, or the discomfort to the status quo. We must embrace a rapid shift to cleaner energy, renewable power, and a low-carbon future. And we must push our elected leaders and institutions to lead.

Cory Gardner pledged to be a different kind of politician when he made his pitch to the campaign cameras in 2014.

Pictures with windmills and vague language won’t suffice to paper-over being a dirty-energy errand boy. Actions matter. And in the case of climate change, lack of action speak louder than any double-talking politician or a staged photo op. Senator Cory Gardner chairs the U.S. Senate Subcommittee on Energy, which he notes on his webpage titled “Energy and Environment.”

Yet somehow the Senator’s “Energy and Environment” page neglects to even mention “climate change.”

In the Senate, I’m proud to chair the Energy and Resources Subcommittee on Energy, which has jurisdiction over renewable and non-renewable energy, the National Laboratory System including NREL, research, development and commercialization, and utility policy.

Senator Gardner has been notoriously hard to pin down. On anything. In 2014, as a candidate in a debate with then-Senator Udall, Gardner equivocated on climate change:

So can anyone say what Senator Cory Gardner think about climate change? While he has kept his head low and done his best to duck the question since his ascension to the Senate, in 2014 he told the Steamboat Institute that: Every Senator loves a good photo-op. Here Sen. Bennet talks to some of Colorado’s solar workers.

Meanwhile over at our other Senator’s website, there is an entire page titled: “Climate Change & Environment” which leads:

Michael knows climate change is not a problem we can push off to the next generation. Persistent droughts and wildfires threaten the businesses of farmers and ranchers in Colorado. Warming temperatures endanger skiing, fly fishing, and hiking in communities across the West. Increasing carbon pollution is threatening the health of our children.

Senator Bennet also has a page “Clean Energy,” that highlights the need to transition to clean energy, and the role Colorado can play as a leader in this shift. On the “Climate Change” page, Bennet’s action on climate change are noted.

In 2017, he cast the deciding vote that kept in place standards to reduce methane emissions on public lands, which harm Colorado’s air quality. He fought sweeping rollbacks of climate policies—including the Paris Agreement, Clean Power Plan, and fuel economy standards—and opposed cuts to the Environmental Protection Agency’s budget. He also led an effort to standardize the metric that federal agencies use to measure the cost of climate pollution.

The difference is clear. There are certainly a number of Coloradans who think Sen. Bennet, along with most Senate Democrats, is not acting boldly enough to address climate change and move us past fossil fuels. But Bennet puts the issue up front, as well as how he has acted to address it. Senator Gardner fails to mention it at all on his “Energy and Environment” page.

Last summer activists had fun with their “Where’s Cory” campaign as the Senator seemed to do all he could to avoid his constituents, appearing in random videos alone by desolate railroad tracks, for instance.

And this summer we have to ask again, as floods and fires and heat waves and droughts grip Colorado and it seems all the globe — When it comes to climate change and leading toward a clean energy transition: Where’s Cory?