Hey, she was governor of Alaska. She knows cold and snow.

Sarah Palin’s devoted fans got a blast of it, too, on Tuesday morning as they started lining up at 6:30 a.m. to get a chance to attend her booksigning in Colorado Springs this evening.

Palin’s book tour for “Going Rogue” brings her to town tonight. She is scheduled to sign books from roughly 7 p.m. to 10 p.m. at the Borders location inside the Chapel Hills Mall, 1710 Briargate Blvd.

The store planned to issue roughly 1,000 wristbands to the signing. Organizers said this is not a hard number – she’ll sign as many books as she can.

The wristbands are color-coded depending on your place in line. And wristband holders are invited to return to the bookstore at 4 p.m. to stake out their territory for the evening signing.

Sounds like the place to be–apparently, she’s almost as popular as Obama now?

UPDATE: What color is your wristband? The Denver Post updates–with an unintentional joke: 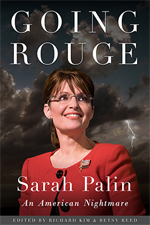 In a pre-dawn rush, hundreds waited outside the Chapel Hills Mall’s Borders in single-digit temperatures for the chance to get wristbands that would allow them to line up later and have copies of Palin’s best-selling “Going Rouge: An American Life” [Pols emphasis] autographed. They returned en masse shortly after 4 p.m. to take spots inside the mall in color-coded lines.

The store first expected Palin to arrive at 7 p.m., but said she could now arrive as early as 5:30 p.m.

Event organizers cut back the number of guaranteed signatures from 1,000 to 600 this morning, after Palin could not sign the promised number of books on other tour stops, said Wanda Fisher, senior marketing manager with Borders.

About 100 more will likely meet with Palin, and the remaining fans could choose to wait in a separate line in case there is more time with Palin, Fisher said.

An angry protest broke out in Indiana, when hundreds of autograph seekers were denied an audience with Palin. Organizers are trying to reduce expectations, Fisher said.

Note to Jessica Fender: ‘Going Rouge’ is a typo liberals hope you make.