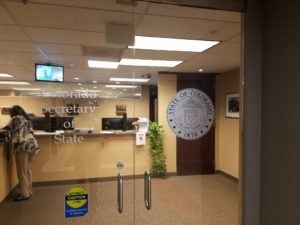 Williams’ new procedures won’t scare off citizens from filing complaints, because the required form is straight-forward, logical, and easy to file.

To help you get a handle on how you can file a complaint, the Colorado Times Recorder is providing a real-life example: Treasurer Walker Stapleton, who appears to have failed to disclose his wife’s annual income of $30,000, even though Colorado law requires Stapleton and other state candidates to disclose their own income as well as that of their “spouse.”

This post will lead you through process, in a step-by-step fashion, from filling out the required complaint to delivering it and waiting for a response. Watch for follow-up posts with new developments as they emerge.

STEP ONE: Identify the Colorado campaign law that the candidate broke and make sure it’s covered under Williams’ new rules. In our example about Stapleton, the applicable law is the Fair Campaign Practices Act, which is specified in Williams’ new rules. Colorado law clearly indicates that Stapleton can’t leave his wife’s income off his disclosure form. (The SOS will also review complaints relating to Article XXVIII of the Colorado Constitution and the SOS’ “rules concerning campaign and political finance.”)

STEP TWO: Answer the questions on the Colorado Secretary of State’s “Campaign Finance Complaint Cover Sheet,” which you can find here. It asks for the name and contact information of the person “filing the complaint” and the person “alleged to have committed the violation.” Then you’re asked to “briefly summarize the allegations made in the attached complaint,” making sure to “allege specific facts to support a legal and factual basis for the complaint.” Easy Peasy.

So, in my Stapleton example, I wrote in my summary:

Colorado Treasurer Walker Stapleton, who’s running for governor, failed to disclose $30,000 paid to his wife, Jenna Stapleton, for her job as “Executive Director” of the Harmes C. Fishback Foundation, which is Stapleton’s family’s foundation.

Under the Fair Campaign Practices Act (§ 1-45-110. Candidate affidavit – disclosure statement), Colorado law requires candidates for state offices to file a personal finance disclosure form with the secretary of state, listing not only their income but also that of their spouses. (CO Rev Stat § 24-6-202 [2016]).

As of June 14, Stapleton’s latest personal finance disclosure statement, dated May 25, 2018, did not list Jenna Stapleton’s income. For more details see the Colorado Times Recorder’s investigation, “In a Second Financial Reporting Lapse, Stapleton Omits $30,000 of Income on his Disclosure Form for Governor’s Race.” (Note Stapleton’s failure to respond to questions.)

The form asks you to attach a “complaint.” I used essentially the same summary above and stapled it to the complaint cover sheet.

STEP THREE: Sign and date the form and submit a hard copy to the secretary of state’s office at 1700 Broadway, Suite 200. (Yes, that’s also where Lynn Bartels works.)

I rode my bike up to the secretary of state’s office and delivered my complaint this morning, but you can also mail it in. Don’t forget to sign yours!

STEP FOUR: Feel good about yourself. Even if your complaint is thrown out, at least you care enough about campaign laws to try to enforce them as best you can. You aren’t a loafer if you get involved.

By the way, here’s why the SOS promulgated the new rules that have been explained in this blog post.

Williams’ new procedures came in the wake of a federal court ruling last week that cast wide confusion over how–and if–Colorado’s campaign finance and disclosure laws would be enforced. Williams’ rules go a long way toward clarifying the matter, at least for now, experts say. That’s important given that the campaign season is upon us, and these laws need to be enforced.

The Denver Post’s Jesse Paul explained other elements of the new process yesterday:

Under the new rules, adopted with consultation from the state’s Democratic and Republican parties and the Colorado Attorney General’s Office, elections officials will have 10 business days to make a decision on whether a campaign finance complaint is meritorious.

If the complaint is rejected by the Colorado Secretary of State’s Office, the person who filed the allegation can appeal. There is also a process under which a flawed complaint can be fixed by whomever filed.

If a complaint is reviewed and found to have merit, it will be forwarded to an administrative law judge — as was the process before.

It appears that the Stapleton complaint used in this blog post to illustrate the new procedures was the first submitted since the new rules were announced. Again, I’ll write follow-up blog posts explaining how it goes.