UPDATE: As Aaron Blake summarizes for the Washington Post:

The Trump administration insisted it didn’t have a policy of separating children from their parents at the U.S.-Mexico border. It said that it was merely following the law. And it said “Congress alone can fix” the mess.

…It’s at once an admission that the politics of the issue had gotten out of hand and that the administration’s arguments were completely dishonest. Virtually everything it said about the policy is tossed aside with this executive action. It’s the political equivalent of waving the white flag and the legal equivalent of confessing to making false statements. Rather than letting Congress rebuke it, the White House is rebuking itself and trying to save some face. 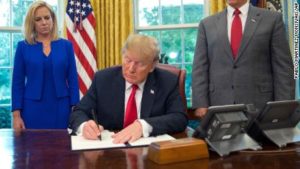 President Donald Trump signed an executive action Wednesday that ends the administration’s policy of separating migrant families crossing the U.S.-Mexico border, abandoning the president’s previous stance that only Congress can fix the problem.

“I didn’t like the sight or the feeling of families being separated,” the president told reporters in the Oval Office, flanked by Homeland Security Secretary Kirstjen Nielsen and Vice President Mike Pence. “I think anybody with a heart would feel strongly about it. We don’t like to see families separated.”

Yet Trump said that he wanted to continue enforcing a strong policy at the border, an issue he campaigned on: “We are keeping a very powerful border and it continues to be a zero tolerance. We have zero tolerance for people that enter our country illegally.”

The action came after Trump and his team faced harsh criticism from lawmakers, activists, religious leaders and former first ladies over the separation of children from their parents in custody, which was panned almost universally as cruel and damaging to the kids’ well-being.