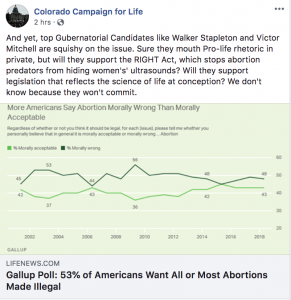 The silence from the two candidates, State Treasurer Walker Stapleton and former state lawmaker Victor Mitchell, has led Colorado Campaign for Life to accuse them of being “squishy” on their alleged “pro-life” stand.

In a Facebook post this week, Colorado Campaign for Life asserted Stapleton and Mitchell “mouth Pro-life rhetoric in private” but won’t say whether they believe life begins at conception or whether they support a proposed law mandating women receive an ultrasound and the option of seeing it, prior to having an abortion.

A review of statements about abortion by Mitchell and Stapleton shows that they’ve both signaled their vague support for the anti-abortion cause, even though their campaign websites are silent on the subject.

The “Issues” section of Stapleton’s website, for example, lists “Sanctuary Cities, Retirement, Education, Energy and Land, Transportation, Second Amendment, and Jobs.” Nothing about abortion rights. In a Facebook interview last week, Stapleton said he’d defend the Colorado Constitution’s ban on state funding of abortion. And during a speech to state Republicans in April, he vowed to protect the “born and unborn,” according to the liberal blog ColoradoPols.

Stapleton did not return an email from the Colorado Times Recorder seeking details on his abortion positions.

Mitchell wrote on Facebook last year that Colorado Republicans “should nominate pro-life candidates,” but he reportedly also believes that Roe v. Wade is settled law–a view that’s considered more pro-choice. And he said he doesn’t support more restrictive abortion laws in Colorado, according to a questionnaire he filled out for the Colorado Independent. He contradicted this stance earlier this year when he said he wants to ban late-term abortions in Colorado. Mitchell did not return an email asking for an explanation of this stance.

Two other Republicans in the GOP primary race appear to have hard-line anti-abortion views.

“I believe that only God has the right to take a life, whether in the womb, beginning at conception, or before natural death,” states the campaign website of Greg Lopez, a former mayor of a Denver suburb, on his website. “I am pro-life, without exceptions.”

Another Republican in the primary race, businessman Doug Robinson, has said he voted for Colorado’s personhood amendment, which would ban all abortion, even after a rape. But responding to a questionnaire from the Colorado Independent, Robinson skipped a question asking if he would support more restrictive abortion laws in Colorado.

Surveys show Republican primary voters  to be anti-choice, but with a recent poll showing Stapleton ahead by double digits, his campaign tactics may already be focused on  the general election, where voters overwhelmingly favor abortion rights.

A February poll conducted by a GOP consulting firm showed that 47 percent of Republican voters would reject a pro-choice primary candidate.

But polling generally shows Colorado’s general election voters to be pro-choice. A 2014 Pew Poll, for example, found 59 percent of the state’s population wants abortion to be legal in most or all cases.