You Can’t Be Sexist if You Have a Female Dog 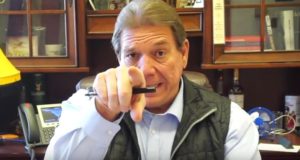 We had a good laugh at this story from KJCT8 in Grand Junction last week about state Sen. Ray Scott taking the “I can’t be racist/sexist because…” explanation to a whole new level.

The story is about a billboard in the Grand Junction area that encourages people to oppose Scott’s re-election in 2018. According to one of the people responsible for the billboard, Scott is “bad for women’s rights, and supports the fetus personhood amendment.” Scott would argue otherwise, because he has a female dog:

As for women’s rights, Scott says he stands up for what he believes in.

“I have a wife and two daughters and I’ve had a female dog and I don’t think I could get away with anything against women’s rights in my house,” said Scott. [Pols emphasis]

This response is right up there with Republican Rep. Judy Reyher’s claim that she can’t be a racist because she once went to a wedding in China.