Brandon Marshall Tells Trump Where He Can Cram It 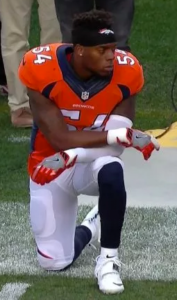 The NFL decided that players and league personnel on the sideline must stand for the anthem, while permitting those uncomfortable with this rule to remain in the locker room. President Donald Trump, who galvanized NFL players last September when he called for owners to “fire” those who disrespect the anthem, applauded the league’s new policy. Trump suggested players who protest “shouldn’t be in the country.”

“I say disgusting because of our First Amendment rights. We have freedom of speech, freedom to protest. So if somebody protests something, now we get someone kicked out of the country? That’s not how things should work in my opinion,” Marshall said. “We are supposed to have a conversation about things, talk about things, work things through. Everybody is not going to agree. Everybody is not going to have the same opinion. Just because somebody has an issue with something going on in this country they should pack up and leave? That’s absurd.” [Pols emphasis]

Marshall and All-Pro cornerback Chris Harris admitted they understood why the league adopted the policy, with Marshall explaining, “I don’t like it, but they are trying to protect the shield.” However, both believe the players should have been consulted before revisions were made…

The NFL’s new policy requiring players to either stand respectfully for the national anthem or stay in the locker room until the anthem is over comes as a direct response to Trump’s wild demagoguery on the issue, which is asserted to have in turn caused conservative football fans to slacken their attendance and viewership of NFL games. The players, for their part, deny that their protest is meant to be unpatriotic–merely calling attention to a critical issue leveraging the camera time they are given.

So, you have all of that. Then, despite the fact that the NFL has essentially surrendered to Trump on the issue over the free speech rights of its players, Trump still can’t leave well enough alone. The President keeps going, ridiculously suggesting that NFL players, American citizens, be kicked out of the country if they don’t stand for the national anthem.

Is there anyone out there willing to defend this? We just don’t see how you can.