UPDATE: As the Associated Press reports, Sen. Cory Gardner apparently has some odd details on the cancellation of the summit with North Korea:

That’s according to Republican Sen. Cory Gardner, who met with Bolton at the White House on Thursday, hours after Trump announced he was withdrawing from a planned summit with Kim next month.

Gardner told The Associated press that Bolton described the letter as a “wake-up” to Kim, who had shown a change in attitude after meeting with Chinese President Xi Jinping.

The senator cited the North Koreans’ refusal to return phone calls to the administration and turning down high-level talks with South Korea.

He said North Korea had shown a “lack of seriousness” in negotiating on denuclearization.

Trump dictated the letter to National Security Adviser John Bolton? Like, Bolton had to sit there and type it out himself? What? 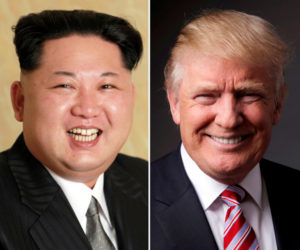 So much for that Nobel Peace Prize. As the Washington Post reports:

President Trump on Thursday canceled a summit next month with North Korean leader Kim Jong Un, citing “tremendous anger and open hostility” from the rogue nation in a letter explaining his abrupt decision.

“I feel it is inappropriate, at this time, to have this long-planned meeting,” Trump wrote to Kim in a letter the White House released Thursday morning.

The summit — which had the potential to be a major diplomatic victory for Trump — had been planned for June 12 in Singapore.

Speaking later at the White House, Trump sounded a bellicose note, relaying that the U.S. military is “ready if necessary” to take action against North Korea if it engages in a “foolish or reckless act” and that South Korea and Japan are willing to shoulder the costs….

…After an emergency meeting at midnight with his top aides, South Korean President Moon Jae-in said he was “very perplexed and sorry” that the summit had been canceled.

Colorado Sen. Cory Gardner (R-Yuma) said today that he supports President Trump’s decision to back out of the North Korea summit, which is not particularly surprising given Gardner’s tendency to follow Trump around like a puppy on virtually every major issue. Gardner is Chairman of the Foreign Relations Subcommittee on East Asia, the Pacific, and International Cybersecurity Policy, but he has largely aligned himself with Trump when it comes to North Korea.