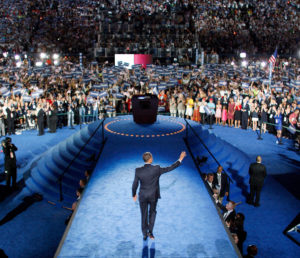 Denver hosted the 2008 Democratic convention at the Pepsi Center, and Barack Obama accepted the nomination in front of more than 75,000 people at then-Invesco Field at Mile High.

A poll follows. We would say that Denver’s status as a world-class city has only gotten better since Barack Obama took the stage at Mile High back in August of 2008. The city is if anything better equipped to handle an event on the scale of a major party convention, with more hotel rooms and a train to the airport.

Whether Democrats have a candidate who can match Obama’s Mile High Magic remains to be seen, but Denver is down for the party if the Party is down with Denver. What about you?