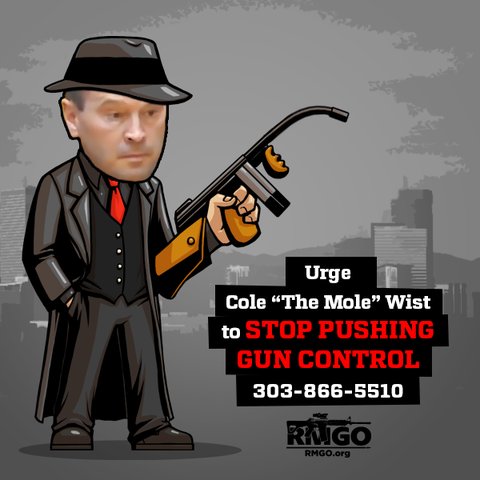 Cole “The Mole.” That will come in handy for Democrats someday.

Extreme Risk Protection Orders (ERPO) provide a process to enable families and law enforcement to temporarily remove guns from an individual who is at an elevated risk of danger to themselves or others. It is a civil legal procedure with due process for the affected individual.

Colorado Ceasefire has been promoting this legislation since it held a forum for behavioral health professionals, law enforcement and legislators in May of 2016. Our efforts ramped up, even in the face of a divided legislature, on December 31 st , when Douglas County sheriff’s deputies were ambushed, and Zackari Parrish fatally shot, by a shooter whose own mother had tried to take his guns away.

“There might have been a very different outcome on December 31 st if this bill had been law,” noted Mary Blegen of Colorado Ceasefire. “No one who is a danger to himself or others should have access to firearms, and 85% of Americans agree with that,” she concluded.

As Denver7’s Blair Miller reports, a last-minute bill is being introduced with a surprising degree of bipartisan support to temporarily remove weapons from the possession of persons in the midst of a mental health crisis:

The measure will be named after Douglas County Sheriff’s Deputy Zackari Parrish, who was shot and killed while on duty on New Year’s Eve. The man accused of killing him and wounding several other deputies and officers had mental health issues and weapons – which Parrish and his fellow officers knew ahead of their encounter.

The measure, the Deputy Zackari Parrish Violence Protection Act, is sponsored by Rep. Alec Garnett, D-Boulder Co., and Rep. Cole Wist, R-Arapahoe Co. Both were praised Monday for their weeks of work on the measure.

Arapahoe County DA George Brauchler, the prosecutor who failed to put the Aurora theater shooter on death row and has been forced to juggle traditional GOP anti-gun control shibboleths with his responsibility to public safety, is commendably choosing the latter in support of the “red flag” bill:

“I’m skeptical of giving the government authority like this, but skepticism is not an excuse for inaction,” he added, saying Colorado’s version of the bill had the “most due process protection” of any bill in the country.

“Those who are out there who are going to characterize this as a gun-grabber bill…I tell you to read the bill,” Brauchler said. [Pols emphasis] “To do nothing at this point no longer makes sense…there’s nothing that so better balances the needs of public safety and mental health.”

With this legislation being supported by the principal Republican candidate for attorney general and a Republican cosponsor in the House, in theory there is a better change of progress being made on this long-vexing issue than we’ve seen in many years. Colorado already passed common-sense measures being debated nationally in response to mass shootings, like requiring background checks for private sales of guns and limiting magazine capacity. The next logical step–and according to some gun-policy activists, the more pragmatic step–is to develop a process to protect the public from gun owners in a mental health crisis while preserving a reasonable degree of due process.

Unfortunately, Colorado’s arch-enemies of common-sense gun safety, the Rocky Mountain Gun Owners, are signaling early and loudly that they will not be on board:

A GUN CONFISCATION bill is moving through the Colorado legislature at a rapid pace, and your phone calls are needed to stop it!

This poorly written legislation drafted by anti-gun radical Rep. Garnett called the “The Extreme Risk Protection Order Bill” or “Red Flag Law”, is gun confiscation plain and simple. If passed, it would allow virtually anyone to report you ANONYMOUSLY as “emotionally unable” and have your right to bear arms stripped indefinitely, without due process. It also provides immunity for “good faith” lies to courts to obtain an order. There is no penalty in the bill for using the process to harass or intimidate you…

Who are Coloradans supposed to believe? Lawmakers in both parties, the Republican DA who prosecuted the Aurora shooter, Republican Douglas County Sheriff Tony Spurlock, who lost a deputy to a deranged shooter that might have been stopped by this law–or Dudley Brown and RMGO? Lip service about “focusing on mental health” after mass shootings is the go-to response from Republicans who want to avoid regulating guns themselves, and here is just such a proposal. For the majority of Colorado residents, we would have to think this bill is a no-brainer.

In the RMGO-dominated GOP-controlled Colorado Senate? Sadly, we’ll have to wait and see. And based on RMGO’s bellicose first response, we’re not at all confident.