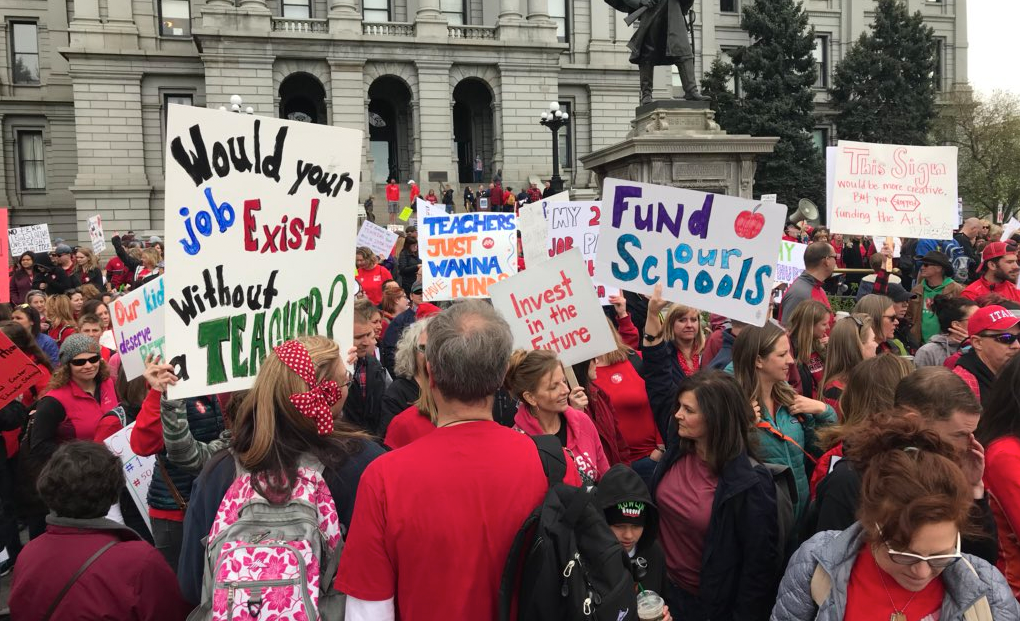 As the Denver Post’s Monte Whaley reports, Colorado public school teachers are out in force at the Capitol today and tomorrow, joining teachers in other states in calling for better funding for education and a better deal for themselves, too:

Teachers from two of the state’s largest school districts — Jefferson and Douglas County — did not report to their classrooms, but instead went to the Capitol to pressure lawmakers into boosting funding for Colorado’s schools and improving the fund teachers depend on for secure retirements.

Cary Kennedy, a Democratic candidate for governor, told the teachers that GOP lawmakers “want to silence your voice,” but instead “You need a raise!”

Denver7’s Blair Miller explains what they’re asking for in detail:

Among those requests, according to the [Colorado Education Association], are that the state make down payments of at least $150 million this year on the so-called “negative factor” and to pay it off by 2022. State public schools are underfunded by $822 million, according to the CEA.

The teachers’ union is also calling for the reduction or freezing of corporate tax breaks until lawmakers restore school funding, and are pushing a ballot initiative to raise taxes on some Coloradans. Proponents say if the initiative is passed, it would raise more than $1 billion each year for public education.

The pushback against these protests seems to consist of the fact that the situation in Colorado for education funding is not quite as dire as in some other state, such as Oklahoma where teachers recently went on strike for an extended period. Teachers and families with public school students find little comfort in being positioned slightly better in a race to the bottom than Oklahoma, and Colorado’s failure to adequately fund public schools despite statewide votes and broad public support have created intense frustration over a period of years. Lawmakers in both parties grow accustomed to this broken status quo, but for the public witnessing the end result it just looks ridiculous. What do you mean we can’t properly fund schools, even when the economy is booming?

So the teachers are protesting in the streets. They’ll be voting too.