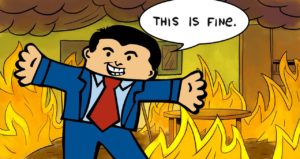 In an interview this morning, Colorado Senator Cory Gardner again rejected any characterization of “chaos” in the White House administration, despite two more recent top-level personnel changes in adviser and cabinet positions, saying it’s “not a surprise to see employee changes in any administration.”

Gardner’s comment, which echoes statements by Trump, came on KOA 850-AM against a backdrop of staff resignations and firings, hasty policy decisions, surprise outbursts, and unconventional management decisions by Trump that have lead many observers on both sides of the aisle to conclude that the White House is, in fact, in chaos or at least in a state of widespread confusion.

Gardner, however, doesn’t see it that way, telling KOA’s  Colorado Morning News hosts Marty Lenz and April Zesbaugh that personnel changes are “no surprise” in any administration, although Gardner admits there is an “little bit more of an uptick”  in changes at the Trump White House. (Listen below.)

For months, as the number and intensity of chaos-like occurrences have escalated in the White House, Gardner, a Republican, has maintained his view of normalcy there.

On March 7 of this year, following the departure of Economic Adviser Gary Cohn, Gardner responded to a very similar question, asked by the same host, on the same show, in a very similar way:

I think everybody would recognize that there’s a significant off-tempo at the White House, whether it’s the pace of actions, the face of Twitter — you name it! — at the White House. And so, I do think that this is just a very, very intense White House. I don’t think there’s chaos in the White House, as some would like to spread. In fact, I think you can just see the — what’s happening in North Korea — the fact these sanctions are working, the Maximum Pressure Doctrine has worked — in a year!– far more than eight years of Strategic Patience ever worked. And so, I think that’s just something that a lot of naysayers would like to — would like to believe.

A reporter’s call to Gardner’s office seeking to know what Trump would have to do for Gardner to see dysfunction or any unusual level disorder at the White House was not returned. This post will be updated if a response is received.

Bossert’s departure fueled the narrative of pandemonium in White House, especially because Bossert was reportedly backed by White House Chief of Staff John Kelly, who’s been seen as a steadying influence.

Gardner’s exchange this morning with Marty Lenz on KOA went like this:

LENZ:  I want to quickly pivot on you, Senator. Last time you were on, we had asked you if you thought there was chaos in the White House. You said no. Have you changed your mind on that, with the changes recently with John Bolton coming in and Bossert being moved out?

SENATOR GARDNER:  Well, look, I think John Bolton is going to bring his own National Security Adviser.  It’s not a surprise to see employee changes in any administration. This White House does have a little bit more of an uptick, but I don’t think there’s chaos.  What I do think we have to have, is a strategy going forward on Syria. This afternoon, as a part of the Foreign Relations Committee, we will have a meeting once again on a UNMF, which is authorization for the use of military force. I think that’s an important discussion to have as we work with the White House and our allies to understand exactly what the response is going to be.

Listen to an audio of the exchange below on KOA 850-AM April 11: