One of the arguments privateers make for seizing America’s lands from the public and fencing them off to private industry is that they would be managed better.

Privatizing land that should not be under government control would both ease the financial burden that inappropriate federal holdings inflict on taxpayers and the U.S. Treasury and encourage local interest and investment in conserving America’s land resources. 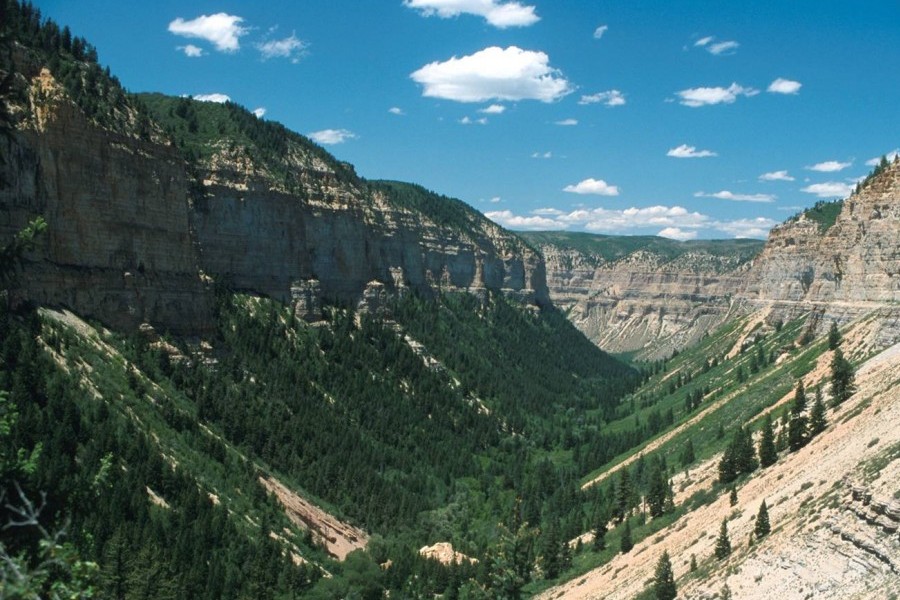 Looking down the East Fork of Parachute Creek on the public lands of Colorado’s Roan Plateau.

And one of the counters to this dubious claim are the many examples where this has not been the case – where loss of public lands has meant loss of public access, public use, public oversight, and ultimately a harm to the public good.

And in most cases, perhaps to the surprise of few, where privatization of public assets, sale of leases, specific “transfers” and other such wishes come up, a particular, and powerful private interest often stands to directly benefit. 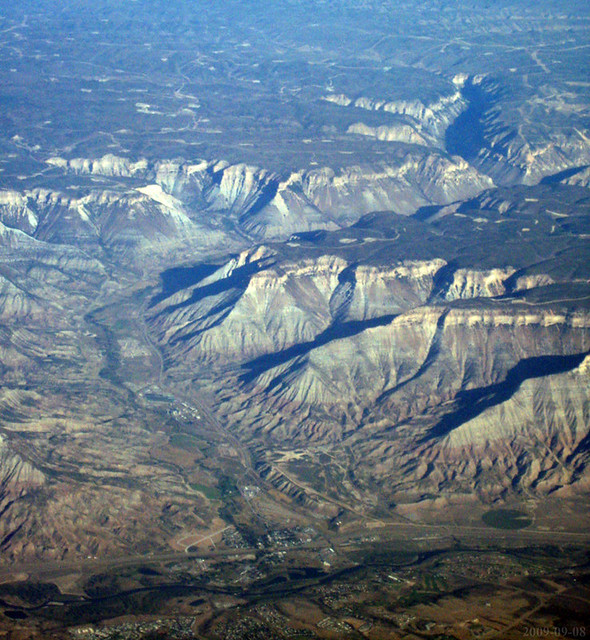 The main fork of Parachute Creek carves a dramatic canyon through the marlstone cliffs of Roan Plateau.

Take as an example Colorado’s Roan Plateau. These highlands start just west of the Grand Hogback and continue for a hundred miles, merging with the Tavaputs Plateau and into Utah.

They include some of the best wildlife habitat, and remarkably still-wild land, in the Lower 48. Where the public lands end atop the Roan Plateau–over which the land-use battles were waged for most of the first decade of this century–the private lands begin.

The road up Parachute Creek, as it heads out of Silt, quickly becomes private, and heads onto what until recently was Encana land. Rising to the east the Roan Plateau’s private lands soon end, and public lands begin. But west for miles and miles, the lands have been taken from the public and handed over to profiteers at a unfathomable loss to the American taxpayer. And herein lies a cautionary tale.

History ought to provide enough of a lesson for Americans about what’s at stake. Take the Roan’s now  “patented” private lands, that stretch for many miles across some of America’s best hunting grounds and habitat. Many of these (now) private lands have been traditionally open to hunters, but now are at risk of being closed to this economically vital public access. The Glenwood Springs Post-Independent reports:

On Thursday, Winn hosted an informational meeting to discuss how the new owners may affect public hunting access to units 22 and 32 in southern Rio Blanco County. His goal was to show that this is an issue that more than a few hunters care about.

“When I heard there was still a chance I decided I had to do something to show it is not just a few hunters,” he told the crowd of dozens of hunters. “My initial goal was to get awareness to the issue and show that there is interest from the community.”

For years, previous owner Encana had allowed hunting to take place on its private property on the Roan Plateau, several thousands of acres known as the “Girls Claims.” But when Caerus Oil and Gas acquired the property, that agreement could no longer be expected to continue. 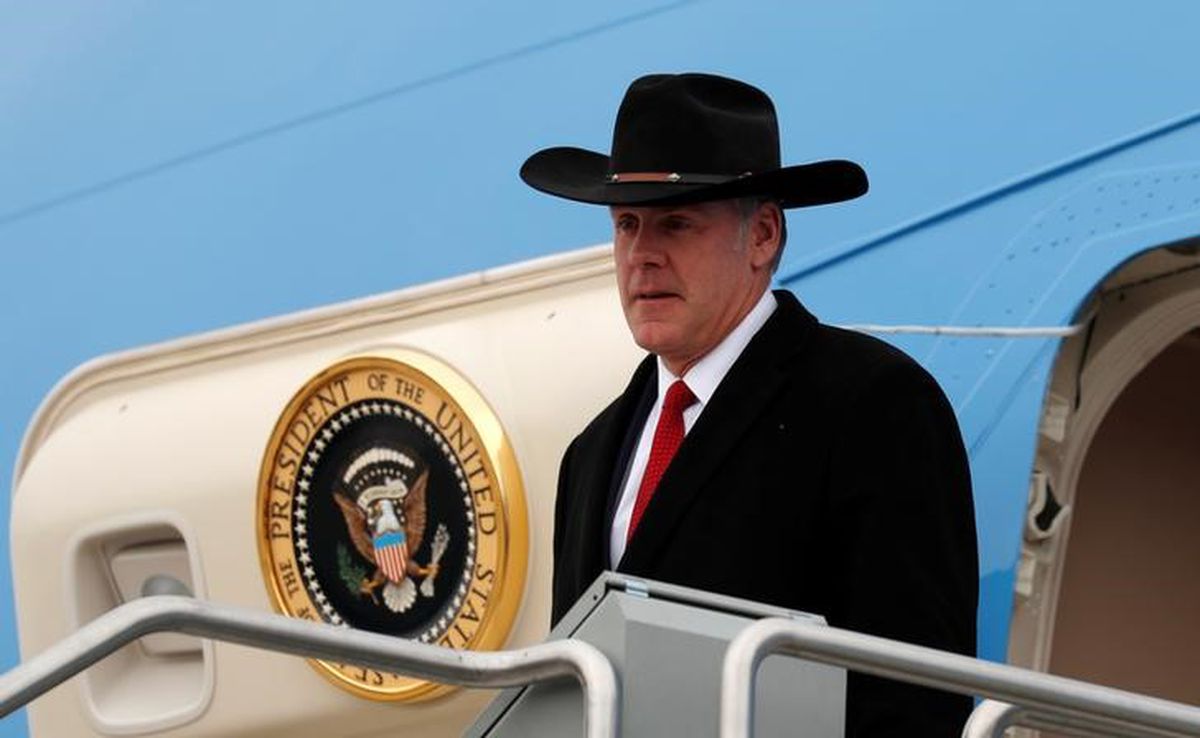 The Viceroy deplanes. No word on his awaiting steed.

Under the Trump administration the royal-minded Interior Secretary, Ryan Zinke, seems intent–in the minds of many–at turning over public lands and resources to private interests, including to oil and gas development, and to coal and uranium mining.

The companies benefiting from Interior’s newly permissive attitude toward leasing, mining, and fracking the public’s lands, may choose to involve communities in their plans, or not. Secretary Zinke is carving out the public from that role as well. And while these moves may please some of his party’s, and perhaps his own future, big-dollar donors, invariably the American taxpayers have the most to lose.

Here history is again a guide. And previous tales of Republican cabinet-member malfeasance abound, even of Interior Secretaries getting too cozy with oil and gas interests.

The Teapot Dome scandal was an earlier example of a Republican administration allowing cozy relationships with industry to rob American taxpayers.

Many people have heard of the Teapot Dome scandal. Far fewer probably recall “the Great Oil Shale Giveaway” although it undoubtedly cost American taxpayers many billion in loss revenue, the loss of tens of thousands of acres of public lands, and–in the minds of many–the “giveaway” of  untold pilfered resources.

Both scandals involve Interior Secretaries favoring oil and gas interests, and even their own, over the public good. And both involve the  Naval Petroleum and Oil Shale Reserves .

A 1988 editorial in Utah’s Deseret News summed up the outrage many felt at that time:

Frederick H. Larsen of Pacific Palasades, Calif., may soon purchase 27,000 acres of federal land in eastern Utah for $2.50 an acre.

The aquisition is made possible by anachronistic “patenting” allowed under the 1872 Mining Law.

…We’re not talking about some hypothetical situation. The Bureau of Land Management is starting to process patent claims on 53,000 acres of oil shale land in Utah and Colorado.

The Washington Post reported, as Congress was investigating the debacle, in 1987:

Interior Secretary Donald Hodel gave away royalties worth as much as $210 billion on federally owned oil shale last year, according to congressional investigators.

That was the conclusion of an unpublished House Appropriations Committee report obtained by our associate Stewart Harris. The committee investigators were looking into a 1986 Interior Department agreement with speculators who held old mining claims to federal land in the West.

It is not yet worthwhile to extract oil from the shale deposits, found mostly in Colorado, Utah and Wyoming. But entrepreneurs have been staking out claims to produce oil from federally owned lands since 1872.

Over the years the claims were sold, inherited, and traded, and what were many small parcels were combined into vast tracts of lands, still in the public domain by the 1980s but now being fought over in federal court to remove them into private ownership.

Earlier, at the start of the 20th Century, there was strong government interest in powering its modern oil-driven navy. Congress passed the Pickett Act to allow the president to “withdraw” large tracts of lands as naval “petroleum” reserves.

In 1916, President Wilson used this authority to create three Naval Oil Shale Reserves, with two in Colorado at the Roan Plateau (and the third in Utah). This action spurred a flurry of speculative leasing under the 1872 General Mining Act. As the federal government reserved vast tracts, speculators swept in and leased proximate lands.

And while our antiquated hardrock mining law allows for public lands to be “patented” for as little as $2.50 an acre, it also requires that viable mining be possible and “diligent effort” be made for the claim is staked and a patent sought. In 1920 Congress separated the “fluid mineral estate” from the “locatable” (“hardrock”) mineral estate, meaning they could only be leased, and not patented outright. The federal government made a heroic attempt to make oil shale work as an energy resource, leaving behind a scarred landscape, piles of waste rock, and years of failure.

For the “oil shale” mining claims to be valid under the 1872 Law, and able to thus be converted into private ownership, one would have to have been able to economically mine oil shale. However, converting this rock into any type of economical energy remains–a hundred years of never-dying dreams–an elusive end, decades and millions in effort notwithstanding. The claims were never adequately “proven,” many argued.

Further, even if the lands could be patented for “oil shale” rock, if the fluid mineral remained under federal control at least the American taxpayer would then benefit through royalties from the oil and gas extraction that might occur there. Under the 1872 Mining Law, no such taxpayer compensation comes. Thus the federal government sought to sever, at least, the fluid minerals from the land patent, arguing that the patent was for “hardrock” shale not the oil and gas minerals.

However, a critical court appeal at the 10th Circuit found “hardrock” oil shale claims filed between 1872 and 1920 should be considered for patent validity. As the case progressed through courts, many argued–even within the Reagan Interior Department–that the government should press its case, and at least seek royalty for (then future) oil and gas development. But the Secretary decided otherwise, as the Post article above notes.

In passing legislation to end any further patents under any pre-existing oil shale claims not yet asserted, Congress cited several examples of what the “giveaway” entailed. A GAO report found, according to another Deseret News article: that

Now the Sentinel helps add another example regarding the lands on Roan Plateau being shut to public use  as a legacy of this ignoble history:

The lands in question once were publicly owned and were managed by the Bureau of Land Management. They were part of a larger amount of acreage that was acquired in the 1980s by energy interests through the process of patenting oil shale mining claims known as the Girls Claims. The BLM stopped accepting new mining claim patent applications after Congress implemented a spending moratorium in 1994 for handling such applications.

Now, 146 years after the General Mining Act, and a hundred years after the Pickett and the Mineral Leasing Acts, Coloradans must still pay a price for the giveaway of public assets. From the Post Independent:

Colorado Parks and Wildlife also provided a statement on the situation.

“Caerus Oil and Gas has indicated they may no longer allow access to hunters, as is their right,” according to the statement. “CPW recognizes this decision will impact many hunters.”

However, CPW said it “respects the rights of private landowners to use their lands in their own best interests. We do not have the authority to direct any private landowner to provide access for hunting.”

CPW said it continues to work closely with all landowners, including oil and gas companies, to pursue natural resource management objectives and gain hunting access where possible.

Colorado’s mule deer depend on wise decisions from our federal land managers. Like most Coloradans they have reason to worry under the Trump administration.

The Swamp is getting deep at Interior and the other agencies in Trump’s DC. And no matter how high-minded cabinet members may choose to act, despite the executive-time twitter tantrums that distract, there is no good to come for the public or our republic from the pillaging of our lands and institutions. History abounds with lessons that show such behavior turning out poorly. It is time to act on them.