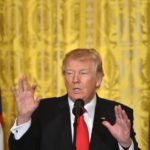 “My client was physically threatened to stay silent about what she knew about Donald Trump,” Michael Avenatti told CNN’s Chris Cuomo on “New Day.” He said more details would be forthcoming in Daniels’ upcoming interview on CBS’s “60 Minutes,” which is scheduled to air later this month.

“She’s going to be able to provide very specific details about what happened here,” Avenatti said…

“I think when people tune in to (“60 Minutes”) interview, they’ll learn the details, the circumstances under which she signed the original agreement as well as what happened thereafter relating to the threats and coercive tactics that were used to shut my client up,” he said.

To be clear, the sum of our experience as bloggers of Colorado politics about the way things are done in the high-rolling world of New York City property development mostly consists of, well, mob movies. It would be impossible for us to know for sure how commonplace physical threats against adversaries in business as well as private life are in the circles the Trump clan has moved in for many decades.

But hoo-boy, we can sure speculate. The Trump Organization pours a lot of concrete.

And yes, given that we’re talking about the President of the United States, it’s pretty creepy speculation.