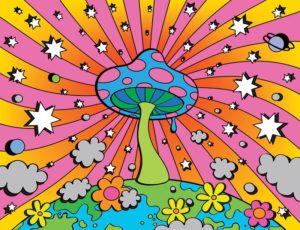 Colorado Public Radio reports on an initiative Denver voters may soon have the chance to approve–and depending on how pharmaceutically colorful your own adolescence was, it might bring back fond memories:

After a few rousing chants of “free the spores,” a small group of roughly 20 citizens filtered into the Denver city and county building Monday for a meeting with city officials and emerged knowing they may soon have the all-clear to gather signatures on a measure to decriminalize psychedelic mushrooms.

The group calls itself Colorado for Psilocybin after the fungi’s scientific name. Their proposed measure would do away with felony charges for people caught with mushrooms, and make them the lowest enforcement priority for Denver police…

A 2005 appeals court decision in New Mexico effectively legalized the cultivation of psilocybin. Last year, Oregon reduced possession charges for many illegal drugs from a felony to a misdemeanor. California voters approved a similar measure in 2014.

Another state may beat Colorado to the ballot: California may vote on a similar measure later this year.

Although to the uninitiated any drug identified as “psychedelic” conjures up visions of wild-eyed naked hippies running through the forest in hot pursuit of elves/gods/whatever it is they’re seeing at the time, in truth the effects of psilocybin mushrooms are quite mild with little to no danger of lethal overdose or addiction. It’s certainly nothing you would want to operate machinery under the influence of, but on objective scale of public safety hazards, magic mushrooms rate low enough that in the era of legal marijuana it’s just not something to get worked up about–not to mention the benefits some users cite from consumption.

If this passes, the next generation of hippies might have yet another reason to include Denver on their gap year world tour! Please trip responsibly.