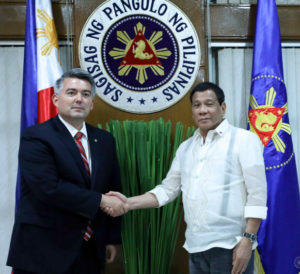 VICE News reports on the latest swashbuckling pronouncement from Rodrigo Duterte, strongman President of the Philippines who appeared on local political radars last year after a controversial unannounced state visit to Manila from Sen. Cory Gardner:

Rodrigo Duterte last week directed his soldiers to specifically target women rebel fighters by shooting them in the vagina, according to local reports.

Addressing a group of former communist rebels, the Philippines president said his armed forces should not kill female rebels but shoot them in their genitals because without them they are useless.

“Tell the soldiers. There’s a new order coming from the mayor. We won’t kill you. We will just shoot your vagina,” Duterte reportedly said. “If there is no vagina, it would be useless.” [Pols emphasis]

An official government translation of the speech, given on Feb. 7, replaced the word vagina with a dash. The transcript says the audience laughed in response… 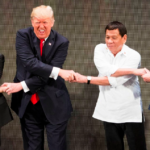 Duterte is known for violent crudities in his speeches to the troops prosecuting his vicious war against drug smugglers, as well as his comments about women that openly condone and even celebrate rape–but this latest comment combines those two themes into something truly politically toxic to Duterte’s friends in the West, like President Donald Trump.

And of course, local reporters should ask Sen. Gardner for comment too! Perhaps Cory and Rodrigo will have a friendly chat about it next time Sen. Gardner is in town for a photo-op.