I’m a veteran. The flag is not about the troops. 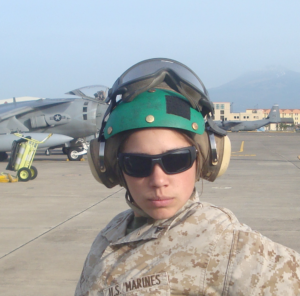 During last week’s State of the Union Address, President Trump again made the insinuation that if we are to support our armed forces, we need to stand for the pledge of allegiance and the national anthem. Obviously, we know he was talking about the NFL protests and any other demonstration against the kind of nationalism we’ve seen from him since he started running for president. Trump has used this divisive message to create a culture of blind patriotism and an us-versus-them mentality.

That message is dangerous and frankly, useless. I didn’t stand for the pledge of allegiance for a single day the last two years of high school. At 15 years old, I felt that it was creepy to repeat things to an inanimate object. I also figured that my first 10 years of saying the pledge daily covered how I felt about the US.

When I turned 19, I joined the United States Marine Corps. I faithfully served my country for 5 years which included a deployment to Helmand Province in Afghanistan in 2009. I stood at the position of attention and watched every single fallen Marine be carried onto their final flight home for 6 months. I know the cost of freedom. My friends have paid it several times over.

Had I been told in high school that I didn’t love America because I didn’t stand, my life would have been very different. I may have never joined the Marines and then I never would have met some of the best and bravest patriots I ever had the pleasure of knowing.

President Trump, who had multiple draft deferments and hasn’t served in the military for one second in his entire life does not get to ignore all the other things that make this country what it is. The flag is not the troops, the flag is all of us. Those whose stand AND those who kneel.