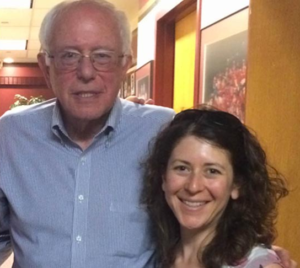 Ernest Luning of the ex-Colorado Statesman reports on a big-name endorsement for one of two Democratic candidates now vying to replace Rep. Paul Rosenthal of Denver, who has been beset by allegations of sexual harassment:

Sanders, who carried Colorado’s 2016 Democratic caucuses by a wide margin as a presidential candidate, said in a statement he was “proud” to endorse Sirota, calling her a fighter for progressive values:

“Emily Sirota stands for the progressive values and platform that we have all been fighting for — pay equity, paid family leave, protecting the environment, Medicare for all Americans, and tuition free colleges and universities. I know she will continue to fight for these values in the Capitol for all Coloradans, and that’s why I am proud to endorse Emily Sirota for Colorado State House District 9.”

Needless to say it’s uncommon for state legislative candidates to pull down the endorsement of a presidential candidate, and given Sen. Bernie Sanders’ enduring popularity with the Democratic base after the tumult and moral vindication of 2016, nobody should discount the value of his support. With that said, Emily Sirota, the spouse of nationally-known investigative journalist David Sirota and director of admissions and operations at Temple Emanuel Early Childhood Center, won’t have a clear path in her primary against Rep. Rosenthal. Ashley Wheeland, longtime political director at Planned Parenthood Votes Colorado, has a lot of experience and local support that she will be able to leverage effectively. All told, this could be a very interesting contest between two highly competitive candidates.

Setting the primary fight between Sirota and Wheeland aside, it’s clear that the loser in all of this is Rep. Paul Rosenthal. Although the only formal complaint against Rosenthal was dismissed due to the underlying incident having occurred before his election to the General Assembly, the aggregate weight of stories about his conduct, including reported incidents as an elected official, is not good for his future prospects. To the extent that the process for handling this kind of behavior in the legislature is being revealed as broadly inadequate, it then falls to voters to exercise their own judgment. In the current nationwide climate of newfound accountability for sexual harassment, that’s exactly what we expect in Rosenthal’s case barring something we don’t yet know.