Many of Colorado’s top supporters of the 2016 Trump Campaign, including Colorado lawmakers Tim Neville (R-Littleton) and Kim Ransom (R-Lone Tree), gathered at 11:30 a.m. Saturday in Lone Tree to celebrate the a one year anniversary of Trump’s inauguration.

The “hour of power” refers to the 11:30 a.m. time of Saturday’s party, which was when Trump was sworn into office.

Partick Davis, Colorado’s Trump Campaign Director in 2016, trumpeted the party on Facebook, writing that he’d been “celebrating one year of #MAGA with my fellow deplorables in Denver.”

One of Davis’ fellow deplorables at Saturday’s event was Steve Barlock, who was co-chair of Trump’s Colorado Campaign and is currently a gubernatorial candidate. Other notables at the party included Robert Blaha, who worked on the Colorado Trump Campaign, Brita Horn, who’s running for state treasurer, former Colorado GOP Chair Steve House, Littleton State Sen. Neville, and Lone Tree Rep. Ransom, according to Laugesen, who said about 100 people attended the party. 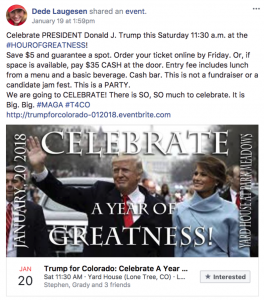 “I personally am celebrating a year of a U.S. president putting Americans first, creating opportunities for business in our booming economy,” said Laugesen. “Jobs and the stock market are booming. Businesses overseas are bringing jobs home. As a mom of a bunch boys, I’m looking to a very bright future for them as a result of Trump.”

The event cost $35 at the door, which covered lunch, but it was not a fundraiser or “campaign jam fest,” according to the Facebook invitation.

“This is a PARTY,” the invitation stated. “We are going to CELEBRATE! There is SO, SO much to celebrate. It is Big. Big. #MAGA #T4CO.”