Echoing Trump, Gardner says passage of tax bill will be a “great Christmas celebration across the country” 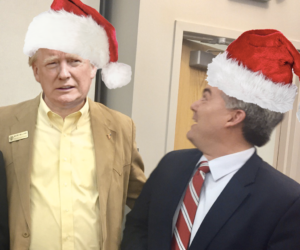 Gardner: “And what a great Christmas celebration across the country, as we pass a bill that would grow wages, cut taxes, and get this country competitive again.”

On Saturday, the New York Times reported that, in fact, the GOP tax bill will not deliver Christmas gifts equally to all Americans:

“But the fine print [of the tax bill] reveals that some will get a much nicer gift than others, the benefits will change over time, and some will be left out in the cold,” reports the Times. “Real estate developers and technology companies could see big tax cuts, while low-income households and people buying health insurance could lose out.”

I left a message for Gardner, asking why he and Trump could believe the tax bill will be such a great Christmas gift for Americans, even when independent analyses and most Americans think otherwise.

He didn’t return my call but fortunately KHOW 630-AM host Ross Kaminsky put the question to Gardner in a slightly different way on Friday, asking why the ill-informed public doesn’t understand how great the Republican bill is.

Kaminsky: One of the key things I think you and I both have been frustrated with for years is that even when the GOP is on the right side of the issue, the public doesn’t seem to understand it that well.  And the tax bill, for example, it doesn’t poll nearly as well as I think it should. And I wonder what you think Republicans, conservatives can do to improve the public understanding, to turn a positive economic thing into also a positive political thing.

Gardner: You know, over the ten day course of the tax bill debate it went from being “some people opposed to it because they thought they didn’t like tax cuts” to “this is going to kill thousands of people” to “this is the biblical end of times and the rapture is just around the corner”. I think those kinds of hyperbole and rhetoric have gone completely over the top. And when, next year, when American workers are starting to see tax relief in their home, in their household…the fear of, you know, the Biblical times is simply not going to materialize.

As the tax bill has moved through Congress, Gardner has dodged answering specific questions about it, including whether he believes taxes should be cut for those earning $1 million or more.

Asked last month by a conservative radio host whether he supported such a cut for the super rich, Gardner said:

Gardner: “Look, I’d like to see tax relief. I’d like to see us do the most powerful thing we can when it comes to policy to drive this economy, and I’m going to make my decisions on what I support based on that lens.” (here at 9:35)

It turns out the tax bill heading toward passage this week lowers taxes on top income earners. Gardner has not objected to this provision.

Other tax-bill “winners” listed by the Times include “President Trump and his Family,” “Big Corporations,” “Multimillionaires,” “Private Equity Managers,” and “Tax Accountants and Lawyers.”

The “losers” listed by the Times include: “People Buying Health Insurance,” “Individual Taxpayers in the Future,” “the Elderly,” “Low-Income Families,” and “Puerto Rico.”