VOTE: Who Will Win the U.S. Senate Race in Alabama? 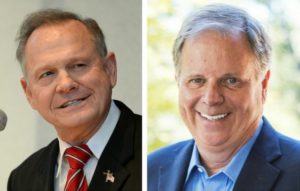 Today is Election Day in Alabama, where a special election to fill the Senate seat of now-Attorney General Jeff Sessions has become one of the most-watched races in recent memory.

Thanks to a number of factors, from the odd timing of the election to the difficulty in projecting voter turnout in a largely-rural state, political prognosticators have been all over the map on what might or might not happen in Alabama today. A good number of polling firms, in fact, are flat-out refusing to put out numbers in the traditional horse race format because there are so many unknown components at play. In other words, friends, you have as good an idea of what is going to take place today as anyone else!

Cast your vote in the poll below, and remember: As always in our polls, we want to know what you THINK is going to happen, not what you might prefer to see in the outcome.