UPDATE: In a press release from liberal activist group Progress Now, former Lt. Gov. Gail Schoettler slams Mitchell for his little ‘joke’–but also Minority Leader Josh Penry, as close to oversight as Mitchell has. Full release after the jump: says Schoettler, “As a former elected official who’s been subjected to behavior like Mitchell’s in the past, I believe that we have to call this out every time it happens, and we absolutely must hold elected officials who stoop so low accountable.” 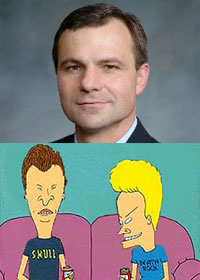 Sen. Shawn Mitchell, as we’ve had the unfortunate duty of noting previously, has a bit of a, well, distasteful side. Here’s a little snippet of audio we were forwarded this week from the Pinnacol investigative committee hearings, chaired by the lovely and gracious Sen. Morgan Carroll.

We would probably not have been so gracious. It’s nice to see Sen. Carroll can laugh this sort of thing off, no doubt it’s not the first lecherous remark she’s had to handle gracefully in her life, but seriously–how was that in any way appropriate from one Senator to another in an official setting?

Really, folks, we’re adults here, and don’t claim to be all G-rated about stuff. But is it too much to ask for, you know, a small shred of decorum in the course of official duties? Something in between the bad-faith ‘proposals’ and Twitter bloviations to prove that our friends on the right…showed up for work on a given day taking the job seriously? Judging from this, and what we know about Mitchell in general, we’d guess he was about as serious in the Pinnacol oversight hearings as Greg Brophy was Tweeting his opinion of the “collectivists” on the Fiscal Stability Commission.

But at least Brophy kept his distinguished colleagues’ underwear out of the discussion.

State Sen. Shawn Mitchell’s suggestion that a witness ‘imagine’ committee chairwoman ‘in her underwear’ latest in a string of unprofessional incidents by Senate Republicans

During a hearing of a legislative committee tasked with investigating alleged abuses by the state’s workman’s comp insurer, Mitchell told a witness at the conclusion of his testimony that if he was nervous he should “relieve that” by “imagining the chairwoman in her underwear.” Mitchell also stated that this is “what I do when I’m nervous.”

“It certainly looks like Shawn Mitchell singled out the chairwoman of the committee, Sen. Carroll, with his sophomoric, suggestive comment for no other reason than her gender and position of authority. How childish of him to insult not just Sen. Carroll, but women everywhere who daily face the silliness of sexism and trivialization in our culture,” said ProgressNow Colorado board member and former Lt. Governor Gail Schoettler. “As a former elected official who’s been subjected to behavior like Mitchell’s in the past, I believe that we have to call this out every time it happens, and we absolutely must hold elected officials who stoop so low accountable.”

“What Mitchell did was bad enough, but it signals another problem,” said Schoettler. “As we saw before when Sen. Scott Renfroe referred to a ‘Biblical’ death penalty for gays or Sen. David Schultheis spoke of his ‘hope’ that babies might ‘have AIDS,’ Senate Republicans seem willing to tolerate demeaning and ugly rhetoric from their members, and Minority Leader Josh Penry is either too weak or tone-deaf to get control of his caucus. This isn’t just another case of right-wing extremists going off the reservation–it’s a failure of leadership.”